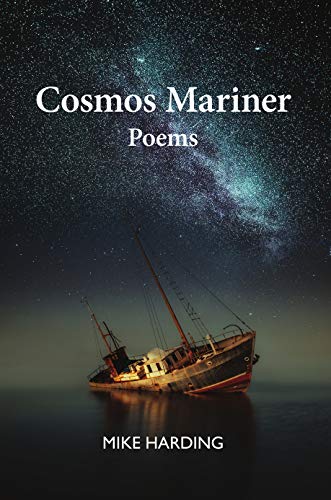 `What is a poet?' the title poem of this collection, Cosmos Mariner, asks and answers: `word-peckers, rhyming jackdaws of the world'. The Cosmos Mariner was a real ship which caught the attention of American poet Conrad Aiken (1889 - 1973) and piqued his interest further when, checking the shipping news, he found its destination was listed as `unknown'. This trope reappears throughout the dark undertow of this collection which contains poems reflecting the distracted political times of today. Against this, gentler poems such as The Cleggan Sonnets and The Curve of Love show Harding's gift for capturing the fleeting moment of sight and sound and fixing them with a piercing simplicity that remains in the memory.

Mike Harding is well known as a stand-up comedian, playwright, poet, broadcaster and documentary maker. He first came to Ireland as a teenager when he hitched around the country heading ultimately for County Galway and the Aran Islands. Instilled with a love of the country by his Irish-Catholic family in Manchester, his love of Ireland was further deepened by one of his teachers at St Bede's College, Manchester - Father Augustus Reynolds. Under his guidance the poetry of Yeats and the plays and writings of J. M Synge took the young poet by the scruff of the neck and sent him reeling onto the Liverpool boat standing with a sunburned thumb at the side of the long road west. Over the following years he returned to Ireland many times, cycling and walking, playing his banjo in sessions and writing; one result of his wanderings was the acclaimed travel and walking book Footloose in the West of Ireland (Pub. Michael Joseph). While working for the BBC on a feature programme on Irish folk singer Dolores Keane, Mike Harding found himself in Clifden and in an estate agent's window found what would become his Irish home, a traditional cottage that had lain empty for almost twenty years with a rotted corrugated iron roof and neither doors nor windows. The view out over Cleggan Bay however was stunning. Two years of hard work turned it back into a home and it was in that home, while looking out over Clegan Bay that much of his latest book of poems The Connemara Cantos was written. Not all of these poems are about Connemara, they are also about Irish immigrants on building sites in Manchester, pubs in London and the beauty of Irish traditional music; but all the poems in this book were either written in or inspired by the very special place that is Connemara - not a county, not a political entity but perhaps something much wider - a state of the soul.

GOR009874403
Cosmos Mariner by Mike Harding
Mike Harding
Used - Very Good
Paperback
Luath Press Ltd
2019-06-04
192
1913025349
9781913025342
N/A
Book picture is for illustrative purposes only, actual binding, cover or edition may vary.
This is a used book - there is no escaping the fact it has been read by someone else and it will show signs of wear and previous use. Overall we expect it to be in very good condition, but if you are not entirely satisfied please get in touch with us.