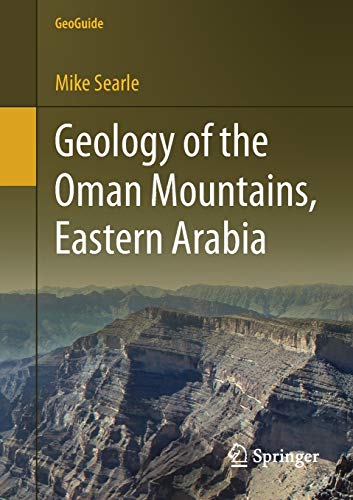 Geology of the Oman Mountains, Eastern Arabia
by Mike Searle

Geology of the Oman Mountains, Eastern Arabia by Mike Searle

This book describes in detail numerous geological sites throughout the mountains of Oman and the United Arab Emirates (UAE) in Eastern Arabia. The region is well known for its oil and gas reserves in the desert interior, and Permian-Mesozoic shelf carbonates exposed in the mountains of the Musandam peninsula, Jebel al-Akhdar and Saih Hatat, where deep wadi canyons provide impressive three-dimensional views into the crust. The region has numerous globally important geological sites, including the world's largest and best-exposed ophiolite complex, the Semail Ophiolite, which is a vast thrust sheet of Cretaceous ocean crust and upper mantle emplaced onto the Arabian continental margin. Other sites include spectacular fossil localities, subduction zone metamorphic rocks (eclogites, blueschists, amphibolites), fold-thrust belts, giant sheath folds and Precambrian salt domes, as well as the huge sand dunes of the Rub al'Khali, the Empty Quarter, and the separate Wahiba (Sharkiyah) sandsea of Eastern Oman.

Written by Mike Searle, who has worked on geological research projects throughout Oman and UAE almost every year since 1978, this book describes the field geology of each site and includes a wealth of maps, field photos and diagrams illustrating key features. It also discusses the history of exploration of Arabia and the search for its hidden geological secrets. The book provides the geological basis for the establishment of a series of World Heritage Sites, National GeoParks and Sites of Special Scientific Interest (SSSI) throughout the region. As such, it is of interest to geologists, tourists, mountaineers, trekkers, rock climbers and naturalists.

Mike Searle is a Professor of Earth Sciences at the University of Oxford. His geological interests include the tectonic evolution of mountain belts, in particular processes associated with subduction, ophiolite formation and obduction, folding and thrusting, regional metamorphism and crustal melting. His work chiefly focuses on the Alpine-Himalayan belt, the Karakoram ranges and Tibetan Plateau region, as well as Southeast Asia (Burma, Thailand, Vietnam, Yunnan). One of his research projects is in the Oman Mountains, UAE, where he is engaged in detailed structural mapping and investigations on the P-T-t evolution of sub-ophiolite metamorphic rocks.

GOR010521605
Geology of the Oman Mountains, Eastern Arabia by Mike Searle
Mike Searle
GeoGuide
Used - Very Good
Paperback
Springer Nature Switzerland AG
2019-06-06
478
3030184528
9783030184520
N/A
Book picture is for illustrative purposes only, actual binding, cover or edition may vary.
This is a used book - there is no escaping the fact it has been read by someone else and it will show signs of wear and previous use. Overall we expect it to be in very good condition, but if you are not entirely satisfied please get in touch with us.