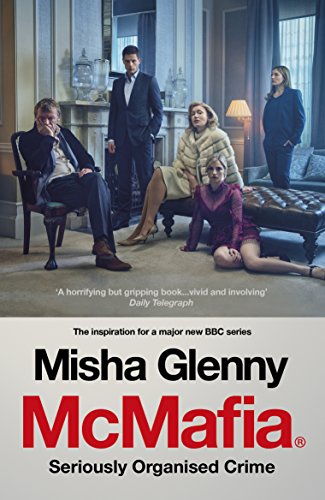 In Stock
$15.49
inc. GST
The extraordinary real stories that inspired the major BBC series Have you ever illegally downloaded a DVD? McMafia is a journey through the new world of international organised crime, from gunrunners in Ukraine to money launderers in Dubai, by way of drug syndicates in Canada and cyber criminals in Brazil.
Like New Very Good
Only 4 left

The extraordinary real stories that inspired the major BBC series Have you ever illegally downloaded a DVD? Taken drugs? Fallen for a phishing scam? Organised crime is part of all our worlds - often without us even knowing. McMafia is a journey through the new world of international organised crime, from gunrunners in Ukraine to money launderers in Dubai, by way of drug syndicates in Canada and cyber criminals in Brazil. This edition comes with a new introduction and epilogue from author Misha Glenny.

"Like a journalistic Indiana Jones he has travelled the world in search of his prey, displaying impressive stamina, intellectual chutzpah and physical bravery on the way.... This is the most important non-fiction book of the year so far - organised crime's version of Fast Food Nation" * Mail on Sunday *
"To be regarded as one of the essential non-fiction works of our time. Exhaustively researched and reported, it's sobering in the extreme, but also riveting, filled with exotic locations, staggering facts, acts of incredible brutality and colourful, if deadly, characters.... Anyone with even the smallest interest in how the world really works should read this book" * GQ *
"The great merit of Glenny's book is that it does not just chronicle the foul deeds of international crime syndicates. It probes the imbalances and injustices that propel people and nations towards criminal behaviour... This, racy, well-researched and highly entertaining book should be essential reading for law reformers everywhere" * Irish Times *
"His message is that the global marketplace has empowered criminals on a huge and terrifying scale.... He tells a grisly story very well... A pacey, riveting, eye-opening account" * Sunday Times *
"This is a big, noble book by a proper reporter who travels the world and gives the Mr Bigs of global crime a poke in the eye... uncomfortable but compelling reading... You must read it" * Literary Review *

Misha Glenny is a distinguished journalist and historian. As the Central Europe Correspondent first for the Guardian and then for the BBC, he chronicled the collapse of communism and the wars in the former Yugoslavia. He won the Sony Gold Award for outstanding contribution to broadcasting. The author of five books, including the acclaimed McMafia and Dark Market, he has been regularly consulted by the US and European governments on major policy issues and ran an NGO for three years, assisting with the reconstruction of Serbia, Macedonia and Kosovo. He now lives in London. website: www.darkmarketinsider.com

GOR008845092
McMafia: Seriously Organised Crime by Misha Glenny
Misha Glenny
Used - Like New
Paperback
Vintage Publishing
2017-12-14
448
1784706744
9781784706746
N/A
Book picture is for illustrative purposes only, actual binding, cover or edition may vary.
This is a used book - there is no escaping the fact it has been read by someone else and it will show signs of wear and previous use. Overall we expect it to be in very good condition, but if you are not entirely satisfied please get in touch with us.