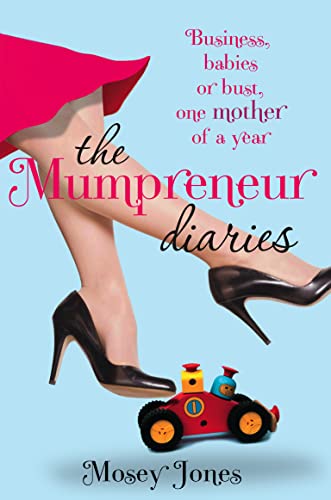 The Mumpreneur Diaries
by Mosey Jones

Working from home, no more commuting, flexible hours, spending more time with the kids - it's what being a Mumpreneur is all about - isn't it?

The Mumpreneur Diaries: Business, Babies or Bust - One Mother of a Year by Mosey Jones

Working from home, no more commuting, flexible hours, spending more time with the kids - it's what being a Mumpreneur is all about - isn't it?

It was a commute to work whilst heavily pregnant with baby number two that sparked Mosey's 'now or never' decision to get off the 9-5 treadmill. Inhaling lungfuls of deliciously ripe BO from a fat bloke's armpit somewhere between Regent's Park and Oxford Circus may have been the tipping point.

After the birth of Boy Two, the thought of returning to the office wasn't appealing to Mosey, but days filled with nappies and Alphabet Spaghetti failed to thrill either.

Why not employ herself, Mosey thought. A mum's concierge business combined with training to be a doula was bound to rake in a profit. Twelve months maternity leave to make it work. How hard could it be?

But Mosey and her mumpreneur mates soon discover that sleepless nights, flaky partners, finance crises and marital breakdowns are all par for the course when mixing babies and a business. Boy One won't eat, Boy Two won't sleep, business ventures are strangled at birth, the mortgage is rocketing and sole wage-earner husband is on the verge of losing his job. In her own year of living dangerously, will Mosey make the break or reluctantly rejoin the rat race?

Mosey's down-to-earth, wry look at life as a frazzled one-woman business is laugh-out-loud funny and full of warmth. This is a `mumoir' that will inspire, motivate and charm would-be mumpreneurs everywhere.

Praise for The Mumpreneur Diaries:

`Mosey Jones has nailed the nappy-sack-scented balancing act that is work and motherhood and combining the two, even when you've run out of wet wipes, and rope. Very funny.'
Rachel Johnson, author of Notting Hell

`A great resource for busy mums who just want a bit of fun.'
Junior Magazine

Mosey is a writer and journalist whose expertise spans business to parenting and all points in between. Mum to Boy One and Boy Two, she is frequently frazzled, bemused and knackered. This does not stop her watching bad US drama instead of 'sleeping when baby sleeps' (whoever said that only has one child) or making a start on the washing up. For the latter, she has employed a husband, to whom she is paying minimum wage and even less attention.

GOR000827859
The Mumpreneur Diaries: Business, Babies or Bust - One Mother of a Year by Mosey Jones
Mosey Jones
Used - Very Good
Paperback
HarperCollins Publishers
2009-03-05
320
000729879X
9780007298792
N/A
Book picture is for illustrative purposes only, actual binding, cover or edition may vary.
This is a used book - there is no escaping the fact it has been read by someone else and it will show signs of wear and previous use. Overall we expect it to be in very good condition, but if you are not entirely satisfied please get in touch with us.