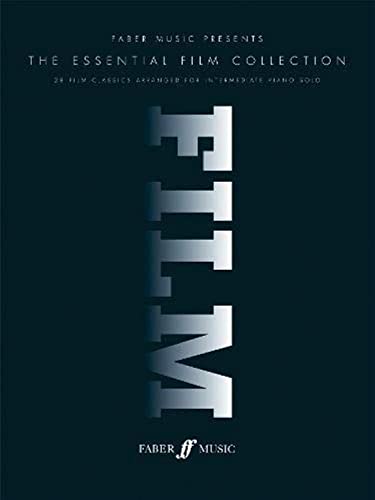 Sometimes pianists would love to play the 'pops' they enjoy, but finding quality arrangements that work for the instrument can be a real challenge. The author takes classic film songs from across the decades and makes well-crafted and satisfying arrangements for intermediate pianists.

Sometimes pianists would love to play popular songs they enjoy but finding quality arrangements that work for piano can be a real challenge. In The Essential Film Collection, pianist Richard Harris takes 28 classic film songs from across the decades and makes well-crafted and satisfying arrangements for intermediate pianists to enjoy. Hits included the theme song from Rocky, James Bond, Chariots of Fire, and many more!

The arrangements are satisfyingly effective, and provide ideal browsing/alternative material for the older teenager or adult learner.

This is a stupendous collection of 28 film classics arranged for piano solo, ranging from Lawrence of Arabia to Pirates of the Caribbean, The Magnificent Seven to Ghostbusters, Harry Potter to The Exorcist and Chariots of Fire to The English Patient. I have to say that once I started playing, I could not stop. The same thing happened when I gave the book to a reluctant sight reader for some quick practice; i had to shut it and promise more later. Certain films and film music tend to evoke times and occasions in our lives and as my pupil and I played through our favourites we recalled the film and the circumstances under which we had seen it. She also commented that each arrangement 'worked' and sounded genuine. The writing of some were more richly orchestral (Gladiator and Blade Runner), others were just fun (The Flintstones and the James Bond Theme). The arrangements are approximately Grade 3-6 standard and satisfyingly, they all sound absolutely true to the originals. There is something for every pianist here. While it is important and rewarding to master playing all styles of music and none should be neglected, pieces in popular styles are useful, in that they very often engage the struggling pupil, give street cred to the teenager and provide relaxation and enjoyment to pianists of all ages. The very best will give both pleasure and progress.

Arranged for intermediate piano solo, this is as fine a compendium of good tunes for the flowering learner (or terminal intermediate) as any available.