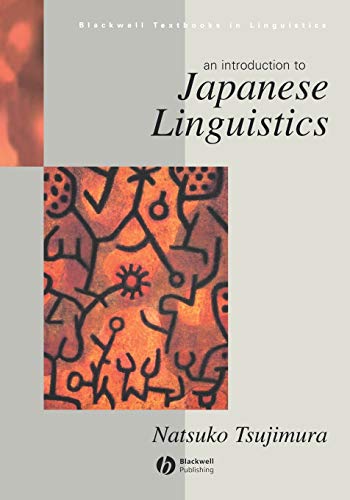 Used Price
$37.99
inc. GST
Free Shipping in Australia
This textbook on the structure of Japanese is written in the framework of generative linguistics. It serves both as an introduction to Japanese linguistics for those who have no prior knowledge of linguistics, and as a reference book on Japanese for linguists in general.
Reviews:
Trustpilot
Very Good

This is the first textbook on the structure of Japanese written in the framework of generative linguistics. It serves both as an introduction to Japanese Linguistics for those who have no prior knowledge of linguistics, and as a reference book on Japanese for linguists in general.The book gives a comprehensive account of Japanese linguistics covering phonetics, phonology, morphology, syntax, semantics, language change, dialect variation, and gender differences. The author introduces linguistic notions and terminology, and discusses theoretical analyses of linguistic phenomena in the language. A major focus is on phonology and syntax, where the formal approach of generative grammar is adopted. To aid the student's learning, chapters are supported by exercises exploring descriptive and theoretical issues, and by reading lists which introduce students to the research literate.Besides its value to students taking courses in Japanese linguistics, and as a reference on the structure of the language, the book will also be a benefit to instructors of Japanese who wish to enhance their linguistic knowledge of the language.

"Teachers and students of Japanese will find the rich set of data and the clear and user-friendly descriptions invaluable in understanding the structure of the Japanese Language." Professor Shigeru Miyagawa, Massachesetts Institute of Technology

"This book is an excellent invitation to Japanese Linguistics not only for students of Japanese but also for native speakers who are interested in the structure of their own language. As it includes insightful discussion of the major theoretical issues and detailed bibliographical information, it is also a valuable reference for theoretical linguistics." Mamoru Saito, University of Connecticut

GOR002889744
Introduction to Japanese Linguistics by Natsuko Tsujimura
Natsuko Tsujimura
Blackwell Textbooks in Linguistics
Used - Very Good
Paperback
John Wiley and Sons Ltd
1995-12-18
420
0631198563
9780631198567
N/A
Book picture is for illustrative purposes only, actual binding, cover or edition may vary.
This is a used book - there is no escaping the fact it has been read by someone else and it will show signs of wear and previous use. Overall we expect it to be in very good condition, but if you are not entirely satisfied please get in touch with us.