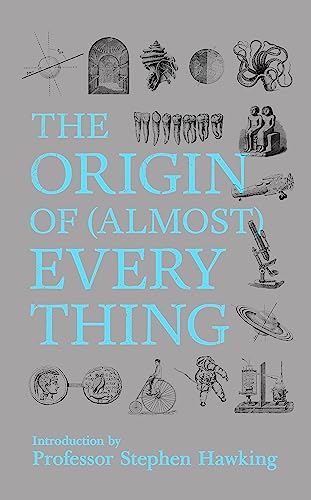 In Stock
$26.99
inc. GST
A journey through life, the universe and everything.
Like New Very Good Good
Only 1 left

New Scientist: The Origin of (almost) Everything Summary

When Edwin Hubble looked into his telescope in the 1920s, he was shocked to find that nearly all of the galaxies he could see through it were flying away from one another. If these galaxies had always been travelling, he reasoned, then they must, at some point, have been on top of one another. This discovery transformed the debate about one of the most fundamental questions of human existence - how did the universe begin?

Every society has stories about the origin of the cosmos and its inhabitants, but now, with the power to peer into the early universe and deploy the knowledge gleaned from archaeology, geology, evolutionary biology and cosmology, we are closer than ever to understanding where it all came from. In The Origin of (almost) Everything, New Scientist explores the modern origin stories of everything from the Big Bang, meteorites and dark energy, to dinosaurs, civilisation, timekeeping, belly-button fluff and beyond.

From how complex life evolved on Earth, to the first written language, to how humans conquered space, The Origin of (almost) Everything offers a unique history of the past, present and future of our universe.

New Scientist: The Origin of (almost) Everything Reviews

Important... The Origin of (Almost) Everything doesn't look like a typical science book. It's friendly and colourful. Its blocks of text and ample images, makes it read more like a magazine than textbook. Unravelling dozens of life's biggest mysteries, Lawton and Daniel's irreverent storytelling approach answers nagging questions that have inspired centuries of scientific inquiry... Like The Origin of (Almost) Everything suggests, the best science writing and illustrations don't just answer your questions - they compel you to ask more. * WIRED *

Since 1956, New Scientist has established a world-beating reputation for exploring and uncovering the latest developments and discoveries in science and technology, placing them in context and exploring what they mean for the future. Each week through a variety of different channels, including print, online, social media and more, New Scientist reaches over 5 million highly engaged readers around the world. Follow New Scientist on Twitter: @newscientist STEPHEN HAWKING was a brilliant theoretical physicist and is generally considered to have been one of the world's greatest thinkers. He held the position of Lucasian Professor of Mathematics at the University of C ambridge for thirty years and is the author of A Brief History of Time which was an international bestseller. His other books for the general reader include A Briefer History of Time, the essay collection Black Holes and Baby Universes, The Universe in a Nutshell, The Grand Design and Black Holes: The BBC Reith Lectures. He died on 14 March, 2018. After a degree in biochemistry and a MSc in science communication, both from Imperial College, Graham Lawton landed at New Scientist, where he has been for almost all the 21st century, as a star columnist and feature writer. His writing and editing have won a number of awards. Jennifer Daniel is the author of SPACE! a picture book explaining the universe through unusual visual forms. Her graphics have been translated into over ten languages and featured on NPR's Morning Edition, Sweden's Dagens Nyheter and in The New York Times. Jennifer has been recognised by many fancy design, illustration, and journalism awards including D&AD's Gold Pencil (London), Art Directors Club Gold Cube (New York), and Society of Publication Design Gold Medal (New York). She speaks about journalism and design for organisations such as Society of News Design, SXSW, and Creative Mornings. She lives in Oakland California, with her husband and two children. Follow her on Twitter @jenniferdaniel

GOR008902139
New Scientist: The Origin of (almost) Everything by New Scientist
New Scientist
Used - Like New
Hardback
John Murray Press
2018-03-08
320
1473629357
9781473629356
N/A
Book picture is for illustrative purposes only, actual binding, cover or edition may vary.
The book has been read, but looks new. The book cover has no visible wear, and the dust jacket is included if applicable. No missing or damaged pages, no tears, possible very minimal creasing, no underlining or highlighting of text, and no writing in the margins.