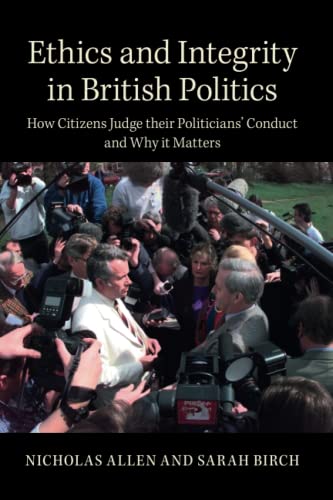 Used Price
23,99 $
inc. GST
Free Shipping in Australia
Public perceptions of political ethics are at the heart of current political debate. Drawing on original survey data, this book offers new insights into how citizens understand political ethics and integrity, and shows how current institutional preoccupations with standards of conduct all too often miss the mark.
Reviews:
Trustpilot
Very Good

Ethics and Integrity in British Politics: How Citizens Judge their Politicians' Conduct and Why It Matters by Nicholas Allen (Royal Holloway, University of London)

Public perceptions of political ethics are at the heart of current political debate. Drawing on original data, this book is the first general account of popular understandings of political ethics in contemporary British politics. It offers new insights into how citizens understand political ethics and integrity and how they form judgments of their leaders. By locating these insights against the backdrop of contemporary British political ethics, the book shows how current institutional preoccupations with standards of conduct all too often miss the mark. While the use of official resources is the primary focus of much regulation, politicians' consistency, frankness and sincerity, which citizens tend to see in terms of right and wrong, are treated as 'normal politics'. The authors suggest that new approaches may need to be adopted if public confidence in politicians' integrity is to be restored.

'... provides an account of our disenchantment with politicians that is both sophisticated and powerful. The sophistication comes from the careful way the argument is developed and the extensive use of an original evidence base. The power is provided by the core message: there is a big gap between politicians' understanding of integrity and that of the public, and disillusionment with the behaviour of politicians matters in terms of democratic engagement.' Gerry Stoker, University of Southampton
'... a major contribution to understanding why trust in Parliament has been in decline over time. It is a judicious blend of theory and analysis which explains the trend and why it matters. This book is a must-read for all students of British politics.' Paul Whiteley, University of Essex
'Allen and Birch's excellent new book is far and away the best empirical study of the subject. Their combination of focus group data and survey research enables them to explore public understandings and expectations, which reveal critical differences in how citizens and Members of Parliament view political ethics and integrity, and to show how citizens' lack of confidence in politicians undermines their participation in the political system. A must-read for anyone interested in the politics of political corruption and integrity.' Donald D. Searing, Burton Craige Professor of Political Science, University of North Carolina, Chapel Hill

Nicholas Allen is Senior Lecturer in Politics in the Department of Politics and International Relations at Royal Holloway, University of London. He is the co-editor of Britain at the Polls 2010 (2011) and is already planning the successor volume for the next general election. Sarah Birch is Professor of Comparative Politics at the University of Glasgow. Her most recent monograph is Electoral Malpractice (2011).

1. Why study perceptions of politicians' conduct?; 2. Thinking about political ethics and conduct; 3. Ethics and misconduct in British politics; 4. Expectations and the scope of ethical judgements; 5. How people judge political conduct; 6. What people think of their elected politicians; 7. The political effects of ethical evaluations; 8. Changing public perceptions: problems and remedies; 9. Concluding remarks.

GOR009870587
Ethics and Integrity in British Politics: How Citizens Judge their Politicians' Conduct and Why It Matters by Nicholas Allen (Royal Holloway, University of London)
Nicholas Allen (Royal Holloway, University of London)
Used - Very Good
Paperback
Cambridge University Press
2015-02-02
341
1107642345
9781107642348
N/A
Book picture is for illustrative purposes only, actual binding, cover or edition may vary.
This is a used book - there is no escaping the fact it has been read by someone else and it will show signs of wear and previous use. Overall we expect it to be in very good condition, but if you are not entirely satisfied please get in touch with us.