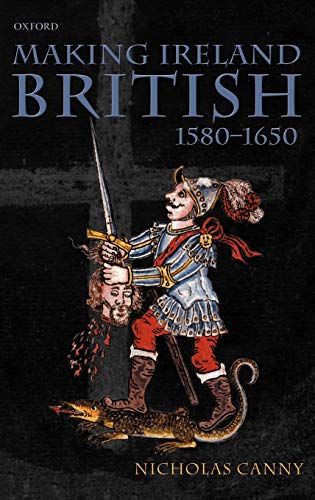 Used Price
$166.99
inc. GST
Free Shipping in Australia
This pioneering study is the first to examine all the English settlements attempted in Ireland during the years 1580-1650. The author looks at the arguments in favour of a "plantation" policy and Irish responses to it in practice. He places what happened in Ireland in the context of events in England, Scotland, Continental Europe, and England's Atlantic colonies.
Reviews:
Trustpilot
Very Good

This is the first comprehensive study of all the plantations that were attempted in Ireland during the years 1580-1650. It examines the arguments advanced by successive political figures for a plantation policy, and the responses which this policy elicited from different segments of the population in Ireland. The book opens with an analysis of the complete works of Edmund Spenser who was the most articulate ideologue for plantation. The author argues that all subsequent advocates of plantation, ranging from King James VI and I, to Strafford, to Oliver Cromwell, were guided by Spenser's opinions, and that discrepancies between plantation in theory and practice were measured against this yardstick. The book culminates with a close analysis of the 1641 insurrection throughout Ireland, which, it is argued, steeled Cromwell to engage in one last effort to make Ireland British.

There is a great deal of valuable information in Making Ireland British. General readers interested in Irish history will discover much that is of particular profit in Canny's elaboration of the 1641 rebellion. This is a fitting climax to a lifetime of work on this topic. * Christianity & Society *
... offers one of the clearest and most detailed descriptions of the flawed colonisation of Ireland. One of the factors that makes Canny's work unusual is his blurring of the boundaries between literary and historical studies. * Christianity & Society *
... for many years it will be compulsory reading for anyone wishing to understand English colonial policy and its impact on native society. * Wiliam and Mary Quarterly *
Canny's knowledge of literary as well as official sources is exemplary. * Wiliam and Mary Quarterly *
No other work reveals so much about the transformation of life across the island through the remorseless colonial process that began in Elizabethan times. * Wiliam and Mary Quarterly *
Let there be no mistake: Making Ireland British is an extraordinary book, a major feat of scholarship, and probably the single most important study of early modern Ireland to appear for a generation or more. * Wiliam and Mary Quarterly *
... fascinating study ... Canny takes his responsibilities as an historian seriously ... Aimed at a postgraduate and scholarly readership but of interest to any serious advanced undergraduate student, the inclusive nature of Canny's survey is one of its strengths and the study of neglected texts and documents alongside the more mainstream provides a detailed overview of debates surrounding a particularly fascinating period in Irish history. The strength of this book is Canny's lively and informative writing style, the skill with which he comprehensively yet clearly outlines a vast quantity of material, and his ability to freshly interpret writings which are both canonical and marginal, historical and literary. * Early Modern Literary Studies *
Making Ireland British is a rich repository of material for historians and literary critics alike ... This volume is [Canny's] crowning achievement, the result of a wealth of archival evidence amassed over thirty years. Its preoccupation with allegory, ambition, and what happens (to) in-between identities will inform all future serious enquiry. * Irish Studies Review *
A major work of social and political history that is likely to have a lasting effect on Irish historiography. The methodology whereby the author moves between national, local, and particular contexts provides lively illustrations of how theories worked in practice according to Ireland's diverse circumstances, and allows him to make full use of the available sources. That he carries this off with an impression of ease is all the more notable given that such sources, particularly on social topics, are limited and often difficult. This book will, therefore, be welcomed by those interested in any aspect of the politics, society, and culture of Ireland and Britain in the early modern period. * Renaissance Studies *
The book presents a devastating indictment of the project of plantation through which the aim to create a British Ireland was attempted over the period, an indictment all the more damning for the matter-of-fact, non-judgmental tone in which it is delivered ... awesome in the scope of the archival research on which it is based ... Oxford University Press is to be congratulated on its continuing support for Irish historical writing. * English Historical Review *
A wonderful work, richly layered and contextualised ... a masterly study and an unmitigated triumph ... a masterpiece of painstaking research ... [a] splendid volume. * History Today *
Canny's work enables us to view the colonial process from a wide range of perspectives; because of the imaginative range of sources it deserves to become both a crucial aid to provoking research and a standard text for early modern Ireland. * History *
As a result of superb lateral thinking, the work constructs an analysis from an impressive range of manuscript sources and printed material which itself will provide inspiration for exploring the controversial assumptions. In addition the book provides a sound critique to a range of recent and current work on Irish and British colonial history. * History *
The study constitutes a major contribution to the historiography of early modern Ireland. * The History Review *
Canny's style, particularly his ability to present complex theoretical arguments in a lucid and coherent fashion, combined with the book's layout enhances its accessibility. * The History Review *
While essential reading for students of this formative epoch in Irish history, Canny's work will also prove valuable to those concerned with Ireland's place in Stuart and early modern European history, and to students of colonialism. * The History Review *
A substantial achievement. It extends Nicholas Canny's particular contribution to Irish history, providing a whole series of new evidence and readings of familiar events, as well as stimulating fresh controversy and debate. * Andrew Hadfield, Times Literary Supplement *
A terrific history of a pivotal era in explaining its own and future times. * Books Ireland *