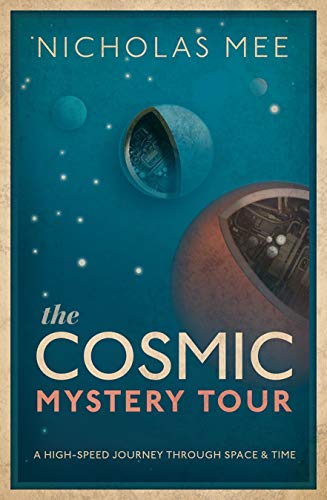 In Stock
$25.49
inc. GST
How did the universe begin? What are gravitational waves all about? Will we find life on other planets? The Cosmic Mystery Tour is a brilliant, entertaining introduction to the discoveries of physics and astronomy. Stories, explanations, and illustrations open up the exciting frontiers of science to any beginner.
Very Good
Only 2 left

The Cosmic Mystery Tour takes us on a lightning tour of the mysteries of the universe enlivened by brief stories of the colourful characters who created modern science. It explores hot topics in physics and astronomy, including the recent discovery of gravitational waves; the quest for the origin of dark matter; the study of the supermassive black hole at the centre of the galaxy; the ongoing search for Earth-like exoplanets; the search for signals from extraterrestrials; and the development of technologies to send spacecraft to the stars. The first part of the book explores the laws that govern the universe. Physics is a spiritual quest to find deep meaning in the cosmos. Its goal is to provide a concise, but accurate description of the world that accounts for all the amazing features that it contains. The second part takes a look at the history of the cosmos, studies its geography and explores some of its architectural highlights such as red giants, white dwarfs, neutron stars and the ultimate cosmic mysteries-supermassive black holes. The last part considers the possibility that life might exist elsewhere in the universe, and explores the cosmos from the outer fringes of science fiction to the ongoing search for alien civilizations.

Nicholas Mee studied theoretical physics and mathematics at the University of Cambridge. He achieved a top distinction in Part III of the Mathematical Tripos of the University of Cambridge and gained his PhD there in theoretical particle physics, with the thesis Supersymmetric Quantum Mechanics and Geometry. He is Director of software company Virtual Image and the author of over 50 multimedia titles including The Code Book on CD-ROM with Simon Singh and Connections in Space with John Barrow, Martin Kemp and Richard Bright. He has played key roles in numerous science and art projects including the Symbolic Sculpture project with John Robinson, the European SCIENAR project, and the 2012 Henry Moore and Stringed Surfaces exhibition at the Royal Society. He is also author of the award-winning popular science book Higgs Force: Cosmic Symmetry Shattered, and co-author of The Physical World: An Inspirational Tour of Fundamental Physics (OUP, 2017).

Part 1: The Laws of The Cosmos1: The Path to Immortality2: The Rosetta Stone and Quantum Waves3: We're Having a Field Day!4: Cosmic Ripples5: Lovely LISA6: Animated Atom Boy7: Twinkle, Twinkle Little Star8: Forces of the World Unite!9: Most of the Universe is Missing!Part II: The History, Geography and Architecture of the Cosmos10: From Genesis to Revelation!11: The Battle for the Cosmos12: Alchemical Furnaces of the Cosmos13: Diamonds in the Sky14: From the Leviathan to the Behemoth15: The Crab and the Jellyfish16: The Ultimate Heavy Metal Space Rock17: Pan Galactic Gargle Blaster18: Cosmic Spacequakes19: Doctor Atomic and the Black Hole20: Supermassive Black HolesPart III: The Biology of the Cosmos21: The Gorgon's Head!22: Raise Your Glasses to the Skies!23: Life, But Not as We Know It!24: To Boldly Go...25: Somewhere Over the Rainbow26: Where is Everybody?