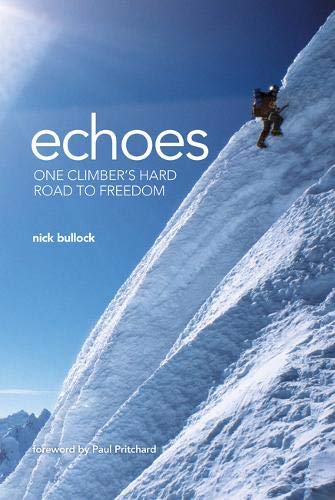 Echoes is the first book from Nick Bullock, one of Britain's leading adventurer climbers and mountaineers. Having worked in the prison service with some of Britain's most notorious criminals for over 15 years, he quit in search of a new way of seeing the world. Echoes is a powerful exploration of what it means to live life on your own terms.

Echoes: One climber's hard road to freedom by Nick Bullock

Shortlisted for the Boardman Tasker Award for Mountain Literature.

'As I sat cradling the man's head, with his blood and brains sticking to my hands, I heard a voice - my own voice. It was asking me something. Asking how I had ended up like this, desperate and lost among people who thought nothing of caving in a man's head and then standing back to watch him die.'

Nick Bullock was a prison officer working in a maximum-security jail with some of Britain's most notorious criminals. Trapped in a world of aggression and fear, he felt frustrated and alone. Then he discovered the mountains. Making up for lost time, Bullock soon became one of Britain's best climbers, learning his trade in the mountains of Scotland and Wales, and travelling from Pakistan to Peru in his search for new routes and a new way of seeing the world - and ultimately an escape route from his life inside. Told that no one ever leaves the service - the security, the stability, the 'job for life' - Bullock focused his existence on a single goal: to walk free, with no shackles, into a mountain life.

Echoes is a powerful and compelling exploration of freedom, and what it means to live life on your own terms.

'A brilliant page-turner from one of our most outstanding adventure mountaineers.' - Chris Bonington

'Wild, exciting and inspirational. A book that grips you throughout with wild tales from handling Britain's most notorious criminals to tackling some of the world's most exciting unclimbed lines. I loved it.' - Mick Fowler
'Utterly gripping. From his first clumsy steps to the all-in commitment of his greatest ascents Nick Bullock's early climbing career was inextricably linked to his work as a prison officer. Prison was both the force he climbed to escape and the hell that compelled him to push himself further in the mountains than others might have gone.' - Mark Twight
'An unusual and powerful story that is as remarkable for its depiction of the author's life as a prison officer in one of the country's toughest jails, Gartree, as for his prodigious achievements on the mountains.' - Peter Beaumont, The Observer
'When some aspects of climbing are turning into another off-the-shelf consumer lifestyle as predictable as the Gap catalogue, Echoes offers a compelling picture of what the real thing is all about.' - Stephen Venables, Climb Magazine
'This book, an important book, a real book, captures a period in modern British climbing history ... the writing is captivating, intelligent, gentle, inquisitive.' - Jack Geldard, UKclimbing.com
'A thought-provoking, entertaining and at times frightening book. Essential reading for anyone into having adventures.' - Dave MacLeod
'Echoes is very entertaining and credit should be given for the author's vivid portrayal of prison life. The writing in the main is spare and matter of fact. A style which suits the rather dark subject matter. Prison life does not really lend itself to romantic prose!' - John Appleby, Footless Crow

Nick Bullock was born on Christmas Day in 1965. After leaving school aged sixteen he worked variously as a gamekeeper, a self-employed labourer and at Alton Towers (less exciting than it sounds) before joining Her Majesty's Prison Service in 1987 where he was posted to the high-security Gartree Prison as a wing officer, then a punishment block officer. In 1992 he was introduced to climbing at Plas y Brenin while training as a physical education instructor: Nick left the prison service in 2003 and has been a full-time climber and part-time writer ever since. Nick is one of the UK's leading climbers, making bold repeats of many of the country's most renowned traditional summer rock climbs. In Scottish winter he has climbed hundreds of routes and many new ones including Nevermore on Lochnagar - with a grade of X/10 it is one of the hardest routes ever climbed ground up. In the European Alps he has climbed approximately forty routes, both established classics and new lines, and he is veteran of over twenty-three expeditions to the greater ranges. It is possibly in the big hills where Nick has truly demonstrated his imagination and abilities, making significant ascents and failing on some audacious attempts around the world with partners such as Jules Cartwright, Al Powell, Kenton Cool, Andy Houseman, Matt Helliker and Paul Ramsden. In September 2017, alongside Ramsden, he climbed the first ascent of the North Buttress on Nyainqentangla South East in Tibet, for which they were awarded a prestigious Piolet d'Or. An accomplished writer, his work has been published frequently in Alpinist, Climb, Rock and Ice, Climber, Vertical, UKClimbing.com, Desnivel, Climbing, the Alpine Journal, the American Alpine Journal, and in 2017 he won the award for Best Mountaineering Article of the Year at the Banff Mountain Book Competition. His first book, Echoes, was shortlisted for the Boardman Tasker Award for Mountain Literature, and his second book, Tides, won the Mountain Literature Award at the Banff Mountain Book Festival. When not on expedition or extended climbing trips, Nick lives in Llanberis, North Wales.

Foreword by Paul PritchardPrologue - TrustBrickWoodlands ChainsSoul MiningEchoesBellsFermentationFoundationsThe BlockGuiltFlowRoadsDreamsInnocenceGerminationLoyaltyTunnelsHonestyTracksThe WormTogetherFaithFearParoleLossFlightNorthDevotionWireWordsConfrontationCrashTimeDetritusThe SeaDetoxStarsTruthTurn Acknowledgements
GOR004967399
9781906148539
1906148538
Echoes: One climber's hard road to freedom by Nick Bullock
Nick Bullock
Used - Very Good
Hardback
Vertebrate Graphics Ltd
2012-09-03
248
Short-listed for Boardman Tasker Award for Mountain Literature 2013
Book picture is for illustrative purposes only, actual binding, cover or edition may vary.
This is a used book - there is no escaping the fact it has been read by someone else and it will show signs of wear and previous use. Overall we expect it to be in very good condition, but if you are not entirely satisfied please get in touch with us
Trustpilot