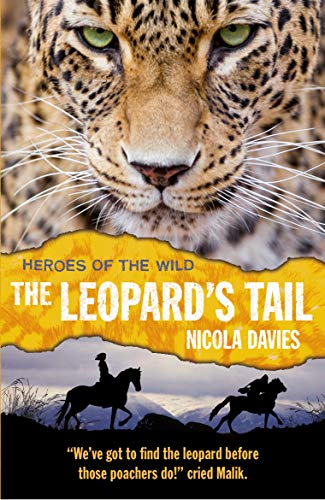 The Leopard's Tail
by Nicola Davies

The Leopard's Tail by Nicola Davies

An illustrated mountain adventure with Caucasian leopards, based on a real conservation project, from award-winning author Nicola Davies.

The sixth title in Nicola Davies' Heroes of the Wild series is a mountain adventure based on a real conservation project to protect Caucasian leopards. Malik loves exploring the mountains near his village in Armenia, and he's never forgotten the leopard he once saw as a very young boy. But the night he hears a shot from a poacher's gun ring out across the mountain he knows his leopard is in grave danger. As Malik strives to find out who would want to kill such a beautiful creature, he uncovers a villainous plot that will mean not only the death of his rare and beloved leopard, but will harm every other living thing in the mountains too.

As well as a gripping plot, the book offers a wealth of information on conservation. The quality of the writing is perhaps the most important feature as the descriptions of the landscape, the appearance and movement of the animals is strikingly beautiful. * The School Librarian *

Nicola Davies is a zoologist and award-winning writer. Her books for children include the best-selling A First Book of Nature, illustrated by Mark Hearld, Tiny: The Invisible World of Microbes, which won the 2015 American Association for the Advancement of Science's prize for excellence in science (picture book category) Just Ducks, shortlisted for the Kate Greenaway Medal, Extreme Animals and The Promise. Nicola lives in Abergavenny, Wales. www.nicola-davies.com @nicolakidsbooks

Annabel Wright trained at Brighton College of Art. Her work can be seen everywhere from theatre backdrops to postage stamps, New York subway cars to building hoardings. For Walker she illustrated the poetry collection From Mouth to Mouth as well as the other five titles in the Heroes of the Wild series, and her many clients include The New Yorker, Amnesty International, The Independent, Royal Mail and The Economist. Annabel lives in Glasgow, Scotland.

GOR007247209
The Leopard's Tail by Nicola Davies
Nicola Davies
Heroes of the Wild
Used - Like New
Paperback
Walker Books Ltd
2015-08-06
112
140635600X
9781406356007
N/A
Book picture is for illustrative purposes only, actual binding, cover or edition may vary.
The book has been read, but looks new. The book cover has no visible wear, and the dust jacket is included if applicable. No missing or damaged pages, no tears, possible very minimal creasing, no underlining or highlighting of text, and no writing in the margins.