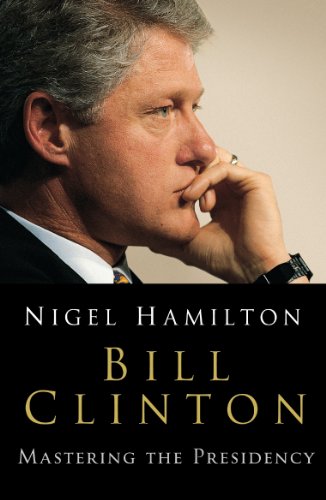 Used Price
$18.99
inc. GST
Free Shipping in Australia
Charts the experience of Bill Clinton, the 42nd President as he took presidential oath of office - and how he fared thereafter in the piranha pool of Washington DC. This title describes what was possibly the greatest disaster and re-reinvention of a president in office in modern times.
Very Good

Nigel Hamilton's account of Bill Clinton's early life and career - Bill Clinton: An American Journey - drew widespread praise. Now, in Bill Clinton: Mastering the Presidency, Nigel Hamilton charts the experience of the 42nd President as he took presidential oath of office- and how he fared therafter in the piranha pool of Washington D.C.

Hamilton charts what was possibly the greatest disaster and re-reinvention of a president in office in modern times. How Bill Clinton faced up to his failures, and refashioned himself in the White House is an epic story. With a thriving U.S. economy and hard-won wisdom in international affairs and in combating the rise of terrorism, Clinton would begin his second term as the undisputed, immensely popular leader of the Western world - aware, however, that terrors ant treason within America loomed as large as dangers abroad.

Insightful, balanced, prodigiously researched and a joy to read, Bill Clinton: Mastering the Presidency is set to become, alongside its prequel, the classic story of Clinton's extraordinary effort to be a modern president, in a modern world-and a chronicle one of the most extraordinary reversals of fortune in modern American politics.

This book is impressive, displaying great intelligence * Mail on Sunday *
Written with verve, researchd with diligence, this is already the best and deepest assessment of Bill Clinton * Observer *

Nigel Hamilton is one of Britain's most distinguished biographers. He began his career with The Brothers Mann, a life of two of Germany's greatest 20th century authors. He then won the Whitbread Prize and Templer Medal for Monty, his definitive, three-volume official life of Field Marshal Bernard Montgomery, following which his JFK: Reckless Youth proved an international bestseller. He became the first Professor of Biography in Britain, at De Montfort University, and currently lives in Boston, Massachusetts, where he is working on the last part of his Clinton trilogy.

GOR002578824
Bill Clinton: Mastering the Presidency by Nigel Hamilton
Nigel Hamilton
Used - Very Good
Paperback
Cornerstone
2008-07-03
784
009946134X
9780099461340
N/A
Book picture is for illustrative purposes only, actual binding, cover or edition may vary.
This is a used book - there is no escaping the fact it has been read by someone else and it will show signs of wear and previous use. Overall we expect it to be in very good condition, but if you are not entirely satisfied please get in touch with us.