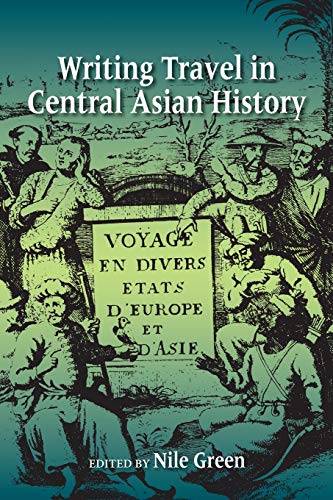 For centuries, travelers have made Central Asia known to the wider world through their writings. In this volume, scholars employ these little-known texts in a range of Asian and European languages to trace how Central Asia was gradually absorbed into global affairs.

For centuries, travelers have made Central Asia known to the wider world through their writings. In this volume, scholars employ these little-known texts in a wide range of Asian and European languages to trace how Central Asia was gradually absorbed into global affairs. The representations of the region brought home to China and Japan, India and Persia, Russia and Great Britain, provide valuable evidence that helps map earlier periods of globalization and cultural interaction.

[A]n eclectic collection that spans from the sixteenth to the twentieth century, offers contributions from historians, literary scholars, and ethnomusicologists. . . We gain a sense of the evolving goals of outside powers: Russian and Persian missions sought to halt a burgeoning slave trade; Indian princedoms sought allies; Chinese Qing bureaucrats sought to categorize and rule the peoples on the edge of their empire; German anthropologists sought an 'Aryan heartland'; and the British worked to define geographic markers to their advantage in the nineteenth century 'Great Game' with the tsarist empire.

In his engaging, lucid introduction to 'Writing Travel in Central Asian History', Nile Green writes that its chapters use the lens of travel writing to 'explore the different meanings given to Central Asia in the far corners of the world during the region's most intensive periods of globalization between the sixteenth and twentieth centuries'. . . intriguing and valuable . . . .May 2016

Accustomed as we have become to appraise Central Asia through the prism of postcolonialism, Nile Green's collection turns our collective head 180 degrees. The eight essays and Green's introduction that frames them sets us off in an entirely new direction. . . . The essays provide a new approach for the study of Central Asia, and, they are excellent for this reason.

Aiming 'to connect Central Asia to global history', this body of research will prove an important anthology for scholars and advanced students alike who are interested in exploring the cultural connections uniting these proximate spheres.

Nile Green is Professor of South Asian and Islamic history at UCLA. His recent books include Bombay Islam: The Religious Economy of the West Indian Ocean, winner of the Albert Hourani Award for outstanding publishing in Middle East Studies and Sufism: A Global History.

NLS9780253011350
9780253011350
0253011353
Writing Travel in Central Asian History by Nile Green
Nile Green
New
Paperback
Indiana University Press
20140102
272
N/A
Book picture is for illustrative purposes only, actual binding, cover or edition may vary.
This is a new book - be the first to read this copy. With untouched pages and a perfect binding, your brand new copy is ready to be opened for the first time
Trustpilot