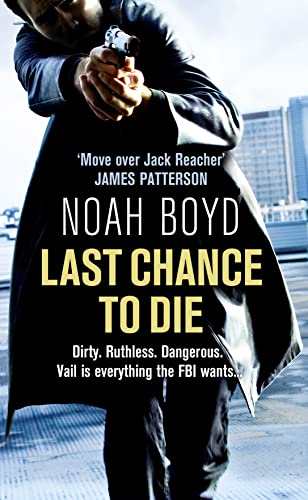 The gripping new action thriller from New York Times bestselling author and former FBI agent Noah Boyd. Steve Vail has brains, brawn and balls - and is back for his latest mission.

The gripping new action thriller from New York Times bestselling author and former FBI agent Noah Boyd. Steve Vail has brains, brawn and balls - and is back for his latest mission.

Steve Vail visits Kate Bannon, Assistant Director of the FBI, for a well-earned and romantic New Years Eve in Washington, DC, but he suddenly finds himself knee-deep in a very complicated and unusual case.

A man known simply as Calculus, an intelligence officer at the Russian embassy, approaches the FBI claiming he knows of several Americans who are supplying confidential government information to the Russian secret service. In exchange for this list, he asks for $250,000 for each traitor the FBI arrests. But when Calculus is suddenly recalled to Moscow, the Bureau suspects the worst. The Russians have probably captured Calculus, and might have access to his list - which means they'll soon track down the informants and murder them.

That is, unless the FBI can find them first, but without knowing exactly who is on the list, they must keep the operation quiet. Once again, Vail is their man. He's the ideal candidate for this kind of stealth recon mission. It soon becomes clear that finding Calculus and his list of traitors isn't going to be quick or quiet. In fact, it's going to be downright deadly...

`Noah Boyd brings his FBI experience to this dazzling thriller. The pace is frenetic, the action is unique, and the drama intense. We have a new American hero in Steve Vail' Patricia Cornwell

`The Bricklayer has terrific pace, surprises galore, and snappy dialogue in the appropriate places. Even better, it has a real hero. Move over Jack Reacher, here comes The Bricklayer' James Patterson

`The Bricklayer is lots of fun, plenty smart, and great escapist reading. And Steve Vail is a magical agent. If I had my way, I'd read stuff like this every minute I'm not on deadline.' Seymour Hersh

Noah Boyd is a former FBI agent who spent more than twenty years working some of the bureau's toughest investigations, including the Green River Killer case and the Highland Park Strangler case (which he's credited with solving). He passed away in 2011.

GOR002724895
9780007384495
0007384491
Last Chance to Die by Noah Boyd
Noah Boyd
Used - Very Good
Paperback
HarperCollins Publishers
2011-05-12
448
N/A
Book picture is for illustrative purposes only, actual binding, cover or edition may vary.
This is a used book - there is no escaping the fact it has been read by someone else and it will show signs of wear and previous use. Overall we expect it to be in very good condition, but if you are not entirely satisfied please get in touch with us
Trustpilot