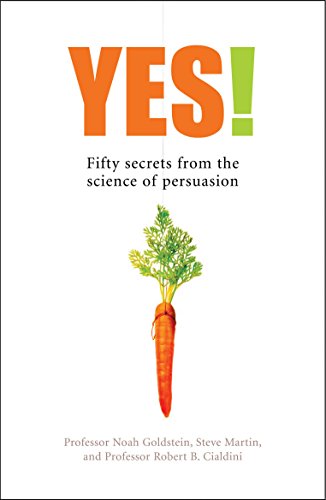 Shows how the psychology of persuasion can provide insights for those interested in improving their ability to persuade others - whether in the workplace, at home or even on the internet.

Yes!: 50 Secrets From the Science of Persuasion by Noah Goldstein

Most of us are only too aware that, whatever roles we have in today's fast-moving world, much of our success lies in getting others to say 'Yes' to our requests. What many people might not be aware of, though, is the vast amount of research that has been conducted on the influence process. What factors cause one person to say 'Yes' to the request of another? Yes! is full of practical tips based on recent academic research that shows how the psychology of persuasion can provide valuable insights for anyone interested in improving their ability to persuade others - whether in the workplace, at home or even on the internet. It combines the counter-intuition of Freakonomics with the popularising of Does Anything Eats Wasps? For each mini-chapter contains a mystery which is solved in a way that provides food for thought for anyone looking to be more persuasive, and for anyone interested in how the world works.
In a world where persuasion is a more and more important part of what governments and organisations have to do, this book is invaluable. -- Matthew Taylor, Chief Executive * RSA *
You should read this book. You should read it because you'll enjoy it; because it's perfectly pitched for smart businesspeople; because it's easy to dip into while waiting for a colleague or a plane; and because if you don't someone else is going to get one over on you. -- Octavius Black * Management Today *
YES! is the Freakonomics of social psychology. It's a handbook to the world. * The Times *
The ideas in this book changed my way of looking at the world. This thinking is the real deal. Want to be in on the next big idea? Don't miss out. -- Daniel Finkelstein * Comment Editor of The Times *
A good read, in the Freakonomics mold. * Evening Standard *
Surprising, provocative, fun. -- Tim Harford * Author of The Undercover Economist *
Jedi-like...an entertaining guide to 50 tried and tested methods of persuasion. * Esquire *
Fascinating, really. -- Jon Ashworth * The Business *
Are there any nice little books I could buy as a present that wouldn't insult the recipient's intelligence? Yes. Or rather Yes!. It will help you understand why you're buying Christmas presents when you don't want to and when the people you're buying them for don't want you to either. -- Stuart Jeffries * Guardian *
If a CEO or head of state was limited to a single advisor mynomination would be Bob Cialdini, the world's most practical socialpsychologist and master of "influence". In this book Cialdini teams up witha gifted young scholar and a seasoned consultant to produce a book filledwith wisdom. Read it and the next time someone asks you to sell snow to the Eskimos or solve global warming you will say "sure, but do you have anything hard I can do? * Richard H. Thaler, co-author of Nudge *
This book ranks in the top 10 business books that I've ever read -- Guy Kawasaki, author of The Art of the Start
Extensive scholarly training in the psychology of influence, together with over 30 years of research into the subject, has earned Dr. Robert Cialdini an international reputation as an expert in the fields of persuasion, compliance, and negotiation. His books, including Influence: The Psychology of Persuasion and Influence: Science & Practice, are the results of more than 30 years of study into the reasons why people comply with requests in business settings. Worldwide, Influence has sold over one million copies. Influence has been published in twenty languages and consistently ranks within the top one half of one percent of books sold on Amazon.com. In the field of influence and persuasion, Dr. Cialdini is the most cited living social psychologist in the world today. Dr. Cialdini received his Ph.D from the University of North Carolina and post doctoral training from Columbia University. He has held Visiting Scholar Appointments at Ohio State University, the University of California, the Annenberg School of Communications, and the Graduate School of Business of Stanford University. Currently, Dr Cialdini holds dual appointments at Arizona State University. He is a W.P. Carey Distinguished Professor of Marketing and Regents' Professor of Psychology, where he has also been named Distinguished Graduate Research Professor. Dr. Cialdini is President of Influence At Work, an international consulting, strategic planning and training organization based on the Six Principles of Influence. Dr. Cialdini's clients include such organizations as Advanta, IBM, Washington Mutual Group of Funds, Coca Cola, KPMG, AstraZeneca, Ericsson, Kodak, Merrill Lynch, Nationwide Insurance, Pfizer, Northern Trust, Prudential, The Mayo Clinic, Glaxo Wellcome, Harvard University - Kennedy School, The Weather Channel, the United States Department of Justice, and NATO.
GOR001295280
9781846680168
1846680166
Yes!: 50 Secrets From the Science of Persuasion by Noah Goldstein
Noah Goldstein
Used - Very Good
Paperback
Profile Books Ltd
2007-11-15
256
N/A
Book picture is for illustrative purposes only, actual binding, cover or edition may vary.
This is a used book - there is no escaping the fact it has been read by someone else and it will show signs of wear and previous use. Overall we expect it to be in very good condition, but if you are not entirely satisfied please get in touch with us
Trustpilot