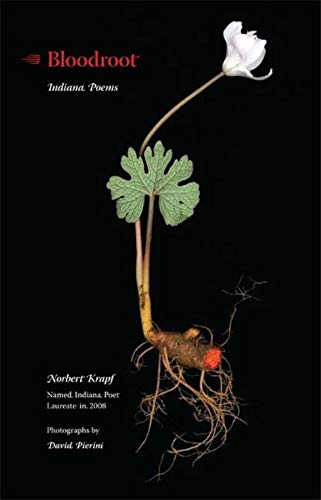 Bloodroot showcases poetry from the collected works of Jasper, Indiana, native Norbert Krapf. Spanning 35 years, these poems focus on Krapf's experiences living in southern Indiana and the intersection of his life with his German ancestry. Forty of the poems are published here for the first time.

Photographs by David Pierini, inspired by Krapf's work with many taken in and around Dubois County, grace this evocative portrait of a poet and place.

Krapf's poems are a conglomeration of wildlife, people, plants, nature, and land, with vivid imagery allowing the reader to practically smell the flowers, walk with bare feet through the grass, and feel the wind on their cheek.March/April 2009

Krapf's poems are sensually rich and wildly accessible. . . . This is a collection to be savored.February 1, 2009

A new poetic voice has risen out of the hills and woods of southern Indiana, Hoosier poet laureate Norbert Krapf. . . . What one has been endowed with is a major part of what one has to endow the future. Out of this endowment Krapf has given us a great legacy.

Anyone who doubts that poetry can reveal the history of a person or a place should read the collected poems of Indiana poet laureate Norbert Krapf. March 2009

Indiana Poet Laureate Norbert Krapf was Professor of English at Long Island University from 1970 47to 2004. His books include The Country I Come From: Poems and Invisible Presence: A Walk through Indiana in Photographs and Poems, a collaboration with photographer Darryl Jones (IUP 2006). He lives in Indianapolis, Indiana.

David Pierini is a staff photographer for The Herald newspaper in Jasper, Indiana. He was named Newspaper Photographer of the Year in 2003 and 2006 by the Indiana News Photographers Association. He lives in Chicago, Illinois.

III. The Country I Come From (2002)
A Whiff of Fresh Sheets
Full Circle
The Language of Place
The Language of Species
What We Lost in Southern Indiana
The Buffalo Trace
What the Miami Call Themselves
Song of the Mississinewa
Mississinewa River Lament
Mississinewa Cottonwood Leaf
Lines Heard in Northern Indiana Cornfields
Mayapple
Fire and Ice
One Voice from Many
Pastoral Poetics
The Corn Cave
Hauling Hay
Hayloft
Milk Music
The Labor Day Boxes
The Horseradish Man
When the House Was New
Woods Hymn
Bloodroot
His Only Hickory Sapling
The Martin Box
The Potato Barrows
Gathering Hickory Nuts
The Quilters
Saturday Night at the Calumet
Because I Could Not Stop
Song for Bob Dylan
Odysseus in Indiana
Return to a Mighty Fortress
Song for a Sister
The Dropped Pigskin
Dream of a Hanging Curve
Dorothy and the Jewish Coat
The Mandolin and the Tenor
Let Morning Light
Hugging the Spirit
Farewell Lullaby
At Least Now
The Reunion
Places

IV. Looking for God's Country (2005)
Letter from a Star Above Southern Indiana
The Nest
Strawberry-Patch Song
The Gardener
Chicken in the Woods
Godfather's Fishing Knife
Patoka River Canoe Trip
Barnyard Hoops
The Schneebrunzer
What the Map Says
God's Country
The Storyteller
Where Trees Are Tall
The Piankashaw in the Sycamore
Coming into the Valley
Dark and Deep
Moon Shadow
The Time Has Come

NLS9780253352248
9780253352248
025335224X
Bloodroot: Indiana Poems by Norbert Krapf
Norbert Krapf
New
Paperback
Indiana University Press
2008-10-01
304
N/A
Book picture is for illustrative purposes only, actual binding, cover or edition may vary.
This is a new book - be the first to read this copy. With untouched pages and a perfect binding, your brand new copy is ready to be opened for the first time
Trustpilot