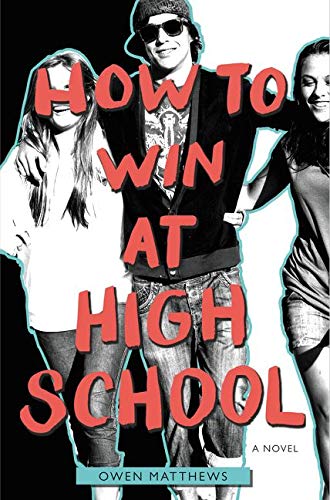 How to Win at High School
by Owen Matthews

In Stock
$36,99
inc. GST
Partly for the sake of his brother Sam, who is paralyzed, Adam decides to go from high school loser to god by selling completed homework assignments, buying alcohol, and arranging for fake IDs, but before the end of junior year, he realizes his quest for popularity has gone way too far.
Very Good
Only 1 left

How to Win at High School Summary

How to Win at High School by Owen Matthews

Adam Higgs is a loser, and he's not okay with it.

But starting as a junior in a new high school seems like exactly the right time to change things. He brainstorms with his best friend, Brian: What will it take for him to take over Nixon Collegiate? Adam searches for the A-listers' weak spot and strikes gold when he gets queen bee Sara Bryant to pay him for doing her physics homework. One part nerd, two parts badass, Adam ditches his legit job and turns to full-time cheating. His clients? All the Nixon Collegiate gods and goddesses.

But soon his homework business becomes a booze business, which becomes a fake ID business. Adam's popularity soars as he unlocks high school achievements left and right, from his first kiss to his first rebound hookup. But something else is haunting him--a dark memory from his past, driving him to keep climbing. What is it? And will he go too far?

How to Win at High School's honest picture of high school hierarchy combines with an over-the-top, adrenaline-charged story line, and Adam's rocket ride to the top of the social order (and his subsequent flameout) is by turns bawdy and sweetly emotional.

How to Win at High School Reviews

"Short, intense chapters, some of which read like poetry, capture snapshots that lend a visceral immediacy to the action."--Bulletin of the Center for Children's Books
"Matthews's debut YA novel has a fast plot with gritty content and dialogue that will appeal to teens."--School Library Journal
"The funny, unforgiving narration will have readers glued to this story."--Publishers Weekly
"Slick, breezy... fast-moving and suspenseful."--Kirkus Reviews

Owen Matthews was raised on rap music and violent video games. He is a graduate of the University of British Columbia's creative writing program, has worked on fishing boats and in casinos all over the world, and currently writes critically acclaimed crime thrillers under a secret identity. A fan of fast cars and sugary breakfast cereals, Matthews lives in Vancouver, Canada.

GOR009983324
How to Win at High School by Owen Matthews
Owen Matthews
Used - Very Good
Hardback
HarperCollins Publishers Inc
2015-03-03
496
006233686X
9780062336866
N/A
Book picture is for illustrative purposes only, actual binding, cover or edition may vary.
This is a used book - there is no escaping the fact it has been read by someone else and it will show signs of wear and previous use. Overall we expect it to be in very good condition, but if you are not entirely satisfied please get in touch with us.