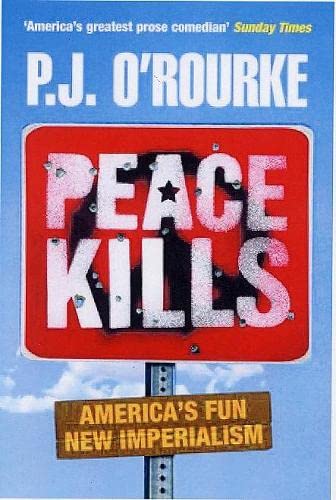 Peace Kills is P. J. O'Rourke's brilliant new book of essays about the world post 9/11, written with all the wit, style and precision you would imagine from the author hailed as 'America's greatest prose comedian'.

In this latest collection of adventures, P. J. O'Rourke casts his mordant eye on America's recent foreign policy forays. He first travels to Kosovo where he meets KLA veterans, Albanian refugees and peacekeepers, and confronts the paradox of 'the war that war-haters love to love'. He visits Egypt, Israel and Kuwait, where he witnesses citizens enjoying their newfound freedoms - namely, to shop, to eat and to sit around a lot. Following 11 September, O'Rourke examines the far-reaching changes in the US, from the absurd hassles of airport security to the dangers of anthrax. In Iraq, he witnesses both the beginning and the end of Operation Iraqi Freedom and takes a tour of a presidential palace, concluding that the war was justified for at least one reason: criminal interior decorating.

Peace Kills is an eye-opening look at a world much changed since O'Rourke wrote his bestselling Give War A Chance - a book in which he presciently declared that the most troubling aspect of war is sometimes peace itself.

P. J. O'Rourke is the bestselling author of ten books, including Eat the Rich, Give War a Chance, Holidays in Hell, Parliament of Whores, All the Trouble in the World, The CEO of the Sofa and Peace Kills. He has contributed to, among other publications, Playboy, Esquire, Harper's, New Republic, the New York Times Book Review and Vanity Fair. He is a regular correspondent for the Atlantic magazine. He divides his time between New Hampshire and Washington, D.C.