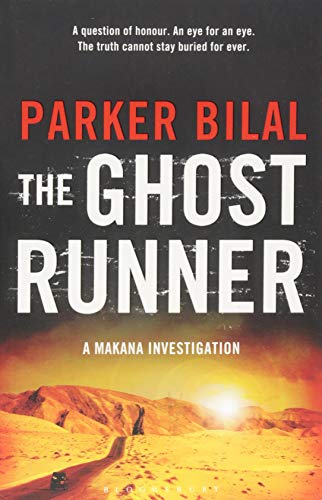 The Ghost Runner
by Parker Bilal

The Ghost Runner: A Makana Investigation by Parker Bilal

It is 2002 and as tanks roll into the West Bank and the reverberations of 9/11 echo across the globe, tensions are running high on Cairo's streets. Private Investigator Makana, in exile from his native Sudan and increasingly haunted by memories of the wife and daughter he lost, is shaken out of his grief when a routine surveillance job leads him to the horrific murder of a teenage girl. Seeking answers, he travels to Siwa, an oasis town on the edge of the great Sahara desert, where the law seems disturbingly far away. As violence follows him through the twisting, sand-blown streets and an old enemy lurks in the shadows, Makana discovers that the truth can be as deadly and as changeable as the desert beneath his feet

The third in this fine series ... Not for the first time, a literary novelist uses the crime genre to terrific effect, exposing official complicity in historic crimes against women * Sunday Times *
Murder mystery that expertly probes the dark side of Cairo ... This atmospheric crime fiction probes deep issues * Independent *
Cairo detective Makana investigates an "honour" crime * Sunday Times, Summer Reading *
A novel that is both celebration and indictment of modern Egypt * Daily Telegraph Summer Reading *

Parker Bilal is the pseudonym of Jamal Mahjoub. The Burning Gates is his fourth Makana Investigation. Born in London, Mahjoub has passed through Sudan, Egypt, Denmark and Britain, before settling in Barcelona.

GOR006460209
The Ghost Runner: A Makana Investigation by Parker Bilal
Parker Bilal
A Makana Investigation
Used - Very Good
Paperback
Bloomsbury Publishing PLC
2015-01-29
432
1408841134
9781408841136
N/A
Book picture is for illustrative purposes only, actual binding, cover or edition may vary.
This is a used book - there is no escaping the fact it has been read by someone else and it will show signs of wear and previous use. Overall we expect it to be in very good condition, but if you are not entirely satisfied please get in touch with us.