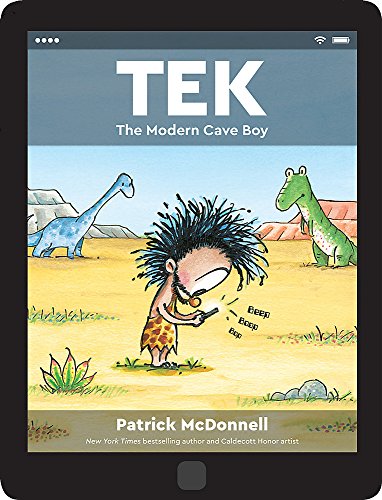 Tek is a cave boy in love with tech: his tablet, videogames, phone, and TV keep him deep in his cave, glued to his devices, day in and day out. He never sees his friends or family anymore - and his ability to communicate has devolved to just one word: "UGH"! Can anyone in the village convince Tek to unplug and come outside into the big, beautiful world?

A distinctive package and design cleverly evokes the experience of using an electronic device that eventually shuts down... and after a magic page turn, Tek (and the reader) reconnects with the real world.

Praise for Tek
*"McDonnell (Thank You and Goodnight) plays fast and loose with the historical record in this playful cautionary tale...ever-cute creatures deliver the story's tech-addiction message with a grin, and clever references abound."
--Publishers Weekly, starred review

"McDonnell blends the prehistoric with the present to send a clever reminder to young readers that beyond their electronic realm there is a world waiting to be explored.... Good, snarky fun for parents and kids."
--Booklist

"The style and whimsy of the images are...charming."
--School Library Journal

"Fun and lively."
--The New York Times Book Review
Praise for Thank You and Good Night A Publishers Weekly Best Picture Book of 2015A BCCB Best Children's Book of 2015
*"This picture book's satisfyingly soft illustrations...feel just right for its plush language and darling characters and content....Small listeners will nestle deep under their covers feeling thankful for tender books that make bedtime a pleasure."

*"The book's simplicity, gentle rhythms, and easy patterns make it perfect for bedtime reading....Youngsters who love their stuffed animals will particularly latch onto this, and parents who want to promote nocturnal tranquility (or those with their own fond memories of Pooh Bear) will appreciate this little gem as well."--BCCB, starred review
*"A book that readers of all ages will be thankful for."--Publishers Weekly, starred review
*"This delightful bedtime story extols the virtues of friendship and of being grateful for simple pleasures."--School Library Journal, starred review

Patrick McDonnell is the creator of Thank You and Good Night, A Perfectly Messed-Up Story, The Monsters' Monster, and Me...Jane, a Caldecott Honor Book. He is also the creator of the internationally syndicated comic strip Mutts, which inspired his picture books The Gift of Nothing, Hug Time, and others. He lives in New Jersey.

GOR010672532
Tek: The Modern Cave Boy by Patrick McDonnell
Patrick McDonnell
Used - Very Good
Hardback
Little, Brown & Company
2016-10-04
48
0316338052
9780316338059
N/A
Book picture is for illustrative purposes only, actual binding, cover or edition may vary.
This is a used book - there is no escaping the fact it has been read by someone else and it will show signs of wear and previous use. Overall we expect it to be in very good condition, but if you are not entirely satisfied please get in touch with us.