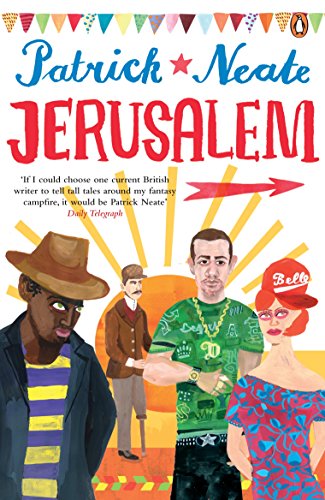 In Stock
$10.49
+10% GST
Presents a story that features a self-serving MP lost and alone in an African dictatorship; a young, ultra-hip entrepreneur looking for something (or someone) new to exploit; and, an English veteran of a colonial war trying to save England from itself.
Very Good
7 in stock

'He looks like a Brit, this guy. Full of good intentions and bad ideas.'

Straddling two continents and two centuries, Patrick Neate's Jerusalem is a sweeping and hilarious epic of English misadventures abroad and at home. It features a self-serving MP lost and alone in an African dictatorship; a young, ultra-hip entrepreneur looking for something (or someone) new to exploit and an English veteran of a colonial war trying to save England from itself. With a host of other brilliant and brilliantly drawn characters, this is the funniest and most moving story of Englishness as it never was, isn't now and, hopefully, will never be.

An excellent writer, a marvellous novel. A thrilling read * Daily Telegraph *
The most thought-provoking novel of the year. An utterly essential read -- Irvine Welsh
Extraordinary, ambitious, bitingly, laugh-out-loud satirical . . . quite simply, a must-read * Daily Mail *
Wildly inventive, funny and superbly original * The Times *
Funny and exciting, Neate is never less than vivid, whether describing the hideous conditions of an African prison, or a run-down pub in London. Excellent * Daily Telegraph *
A corrosive and blistering satire on colonialism and an eloquent, angry and relevant novel that speaks its own truth to power * Sunday Telegraph *
A multi-layered, jam-packed and often satirical novel rich in ideas and argument. Neate's most inventive book to date . . . invites comparisons with David Mitchell's genre-busting Cloud Atlas * Guardian *
Wonderful, impressive, fascinating. Neate is always an engaging and sharp writer * Independent on Sunday *
Witty and acerbic dialogue, an unflagging comic plot, upbeat entertainment * Independent *
A very funny take on Englishness, colonialism and the search for authenticity * Financial Times *
A curious, ridiculous and insightful exploration of Englishness * Esquire *
Clever, moving and wise -- Marina Lewycka * Sunday Telegraph Books of the Year *
Where Neate excels is in his talent for the incongruously horrible ... there are some excellent jokes along the way * Spectator *
His most accomplished novel ... stands at some uber-cool crossroads between pop culture, social theory, racial politics and an old-fashioned belief in the power of storytelling ... it's a tricky thing to keep so many balls spinning but Neate makes it look easy * Metro *

Patrick Neate is the author of four previous novels: Musungu Jim and the Great Chief Tuloko, which won a Betty Trask Award, Twelve Bar Blues, which won the 2001 Whitbread Novel of the Year Award, The London Pigeon Wars, and City of Tiny Lights. His nonfiction includes Where You're At, which won the NBCC Award for Criticism in the USA.

GOR001951265
Jerusalem by Patrick Neate
Patrick Neate
Used - Very Good
Paperback
Penguin Books Ltd
2010-02-04
416
0141040025
9780141040028
N/A
Book picture is for illustrative purposes only, actual binding, cover or edition may vary.
This is a used book - there is no escaping the fact it has been read by someone else and it will show signs of wear and previous use. Overall we expect it to be in very good condition, but if you are not entirely satisfied please get in touch with us.