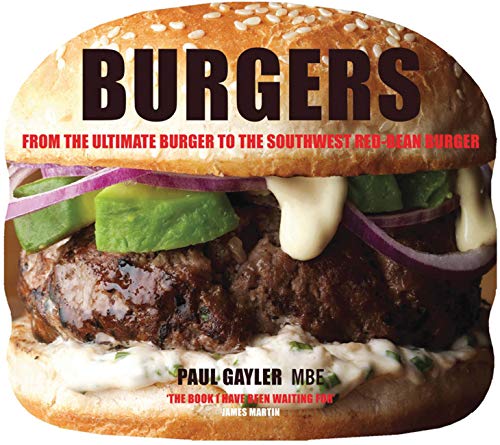 Sweeping away the enduring perception of burgers as merely a fast-food staple, Paul Gayler allows everyone to bring gourmet cooking into their own kitchen - whether for a sophisticated dinner party or a low-key barbecue.

Tapping into the global contemporary style of cuisine for which he is so well-known, Paul Gayler MBE, former Executive Chef de Cuisine at The Lanesborough hotel in London, chooses 25 of his favourite burger recipes. Including a selection of meat fish and vegetarian recipes, this collection offers something for everyone, from classic favourites such as the Ultimate Burger with 'the works' and the Wolseley hamburger, to mouth-watering, new recipes such as the Caribbean pork burger, the Tandoori lamb burger and the Walnut, Courgette and Millet burger. And where's a burger without some accompanying fries and sides? All the sides - from classic slaw and ultimate fries to basic mayo and Tabasco ketchup, and much more in terms of relishes, pickles and sauces - are handily grouped together at the back of the book. Whether you're cooking for a sophisticated dinner party or a low-key barbecue, there's a burger here for every occasion.

"The book I have been waiting for." James Martin

Paul Gayler is well known as Executive Chef at the prestigious London hotel The Lanesborough on Hyde Park where he leads a team of 35 chefs and oversees a restaurant seating 100 as well as six banqueting rooms. He has 20 years' experience in some of the most respected kitchens and restaurants in Europe. As well as having made many appearances on British TV, including This Morning and his own 13-part series entitled The Green Gourmet, Paul now also has over 20 cookery books to his name, including four titles for Jacqui Small: Steak, World Breads, Burgers and Sausages. His books have sold over 500,000 copies worldwide and have been translated into ten languages. Paul has also won The Guild of Food Writers' Cookery Book of the Year and has been nominated for a prestigious Andre Simon Award. His latest titles, Sausages has been nominated for a prestigious World Gourmand Award for a single subject book. Paul somehow also manages to find time to act as a consultant to a number of food companies where he advises on product development and innovation. He also judges up-and-coming young chefs and demonstrates his cooking skills at culinary exhibitions throughout Britain and overseas in locations such as Dubai and Singapore. He describes himself as an eternal apprentice, which is his way of saying that he is constantly learning, always developing and perfecting his art. He calls his style `Eurasian', which is a base of European techniques with flavours of the Orient. He has worked in both Chinese and Indian restaurants and spent a short period in Singapore furthering his understanding of the methods of spicing. He is well known as one of the first chefs in London to create specifically catered dishes for vegetarians on both the a la carte and special vegetarian menus at The Lanesborough.

GOR006044299
Burgers by Paul Gayler
Paul Gayler
Used - Very Good
Hardback
Jacqui Small
2014-07-31
64
1909342734
9781909342736
N/A
Book picture is for illustrative purposes only, actual binding, cover or edition may vary.
This is a used book - there is no escaping the fact it has been read by someone else and it will show signs of wear and previous use. Overall we expect it to be in very good condition, but if you are not entirely satisfied please get in touch with us.