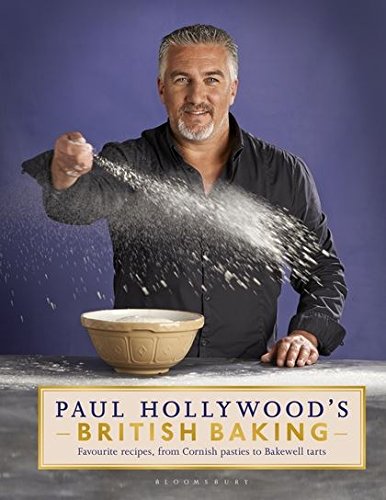 Fresh cherry cake, Plum bread, Baked Somerset Brie, Honey buns, Scottish oatcakes, Boxty pancakes ... you don't get better than a traditional British bake. Join Paul Hollywood for a personal tour around the regions of Britain and discover the charming history of their finest baked delights. Paul will show you the secrets behind the recipes and how to create them in your own kitchen - and, in his inimitable style, he'll apply a signature twist. Rich with beautiful recipe photography, maps and illustrations, here is the ultimate collection of British bakes from the nation's favourite artisan baker.

Good practice if you're planning on applying for a spot in the marquee next year * Radio Times *
Hearty comfort food * OK Magazine *
Beautiful photographs, maps and illustrations * Sun *

Paul Hollywood shot to fame with his role as a judge on the Great British Bake Off. He is the author of the bestselling How to Bake, Paul Hollywood's Bread and Paul Hollywood's Pies & Puds. He worked as Head Baker at exclusive hotels including Cliveden and the Dorchester and he went on to launch The Paul Hollywood Artisan Bread Company, which now supplies Harrods among others. @PaulHollywood / paulhollywood.com

GOR006299907
Paul Hollywood's British Baking by Paul Hollywood
Paul Hollywood
Used - Very Good
Hardback
Bloomsbury Publishing PLC
2014-10-09
320
1408846489
9781408846483
N/A
Book picture is for illustrative purposes only, actual binding, cover or edition may vary.
This is a used book - there is no escaping the fact it has been read by someone else and it will show signs of wear and previous use. Overall we expect it to be in very good condition, but if you are not entirely satisfied please get in touch with us.