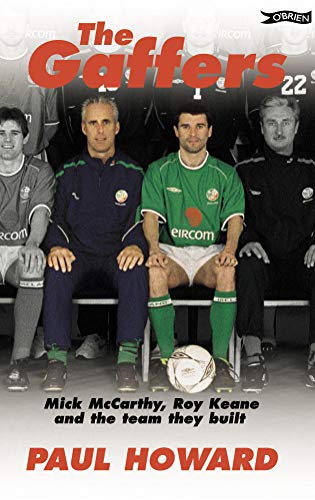 The Gaffers by Paul Howard

The full story of the Irish team, their World Cup campaign and soccer's greatest controversy.

The Gaffers: Mick McCarthy, Roy Keane and the Team They Built. by Paul Howard

1 September 2001, Lansdowne Road: Ireland vs Holland. In one of the biggest upsets ever seen in football, the Irish team beat the Dutch to gatecrash the World Cup party.

But for Mick McCarthy and Roy Keane -- the chief architects of this incredible achievement --there was no warm victory embrace. They shook hands, briefly and awkwardly, not looking at each other. It was a moment that defined a footballing era: the manager and his captain behaved like strangers, with no hint of the camaraderie said to exist in the team. That moment foreshadowed the most extraordinary debacle in Irish sporting history, when a bust-up between Keane and McCarthy ended in the manager sending the captain home, his World Cup dream in tatters.

Paul Howard examines the complex and explosive dynamic between the two men who brought the Irish team to the World Cup, but whose relationship could not endure to the final round. He talks to the players, the management team and the fans, and raises serious questions about the role of the FAI.

The full story of the Irish team, their World Cup campaign and soccer's greatest controversy.

'The best parts of it come after meltdown in Saipan where the writer's short, staccato accounts of each of Ireland's games in Japan and Korea are thrilling, even though anyone reading knows exactly what's coming next' -- The Sunday Tribune * The Sunday Tribune *
'Compulsive reading' -- Killarney Advertiser
Paul Howard helps Ross O'Carroll-Kelly to write his autobiographical series, largely because Ross can't really write, roysh? Find out more at rossocarrollkelly.com. He is also the author of the bestselling prison expose, The Joy, and co-author of Celtic Warrior, the autobiography of boxer Steve Collins. A former Sports Journalist of the Year, Paul covered the World Cup in Japan and Korea in 2002, and the rugby World Cup in Australia in 2003. His account of the Irish soccer squad and the notorious drama in Saipan, The Gaffers: Mick McCarthy, Roy Keane and the Team they Built, was a bestseller. Paul has also written several massively popular plays and has won the popular fiction prize at the Irish Book Awards three times for books in the Ross O'Carroll-Kelly series.
GOR001818604
9780862787813
0862787815
The Gaffers: Mick McCarthy, Roy Keane and the Team They Built. by Paul Howard
Paul Howard
Used - Very Good
Paperback
O'Brien Press Ltd
2002-08-27
240
N/A
Book picture is for illustrative purposes only, actual binding, cover or edition may vary.
This is a used book - there is no escaping the fact it has been read by someone else and it will show signs of wear and previous use. Overall we expect it to be in very good condition, but if you are not entirely satisfied please get in touch with us
Trustpilot