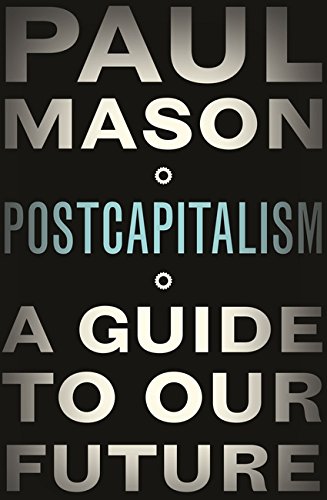 Used Price
$23.49
inc. GST
Free Shipping in Australia
Explores how past societies have collapsed or changed, and provides a powerful critique of why our present system of financial capitalism has failed us. This book guides you through an era of seismic economic change, and how we can build a more equal society.
Reviews:
Trustpilot
Very Good Good

PostCapitalism: A Guide to Our Future by Paul Mason

From Paul Mason, the award-winning Channel 4 presenter, Postcapitalism is a guide to our era of seismic economic change, and how we can build a more equal society. Over the past two centuries or so, capitalism has undergone continual change - economic cycles that lurch from boom to bust - and has always emerged transformed and strengthened. Surveying this turbulent history, Paul Mason wonders whether today we are on the brink of a change so big, so profound, that this time capitalism itself, the immensely complex system by which entire societies function, has reached its limits and is changing into something wholly new. At the heart of this change is information technology: a revolution that, as Mason shows, has the potential to reshape utterly our familiar notions of work, production and value; and to destroy an economy based on markets and private ownership - in fact, he contends, it is already doing so. Almost unnoticed, in the niches and hollows of the market system, whole swathes of economic life are changing.. Goods and services that no longer respond to the dictates of neoliberalism are appearing, from parallel currencies and time banks, to cooperatives and self-managed online spaces. Vast numbers of people are changing their behaviour, discovering new forms of ownership, lending and doing business that are distinct from, and contrary to, the current system of state-backed corporate capitalism. In this groundbreaking book Mason shows how, from the ashes of the recent financial crisis, we have the chance to create a more socially just and sustainable global economy. Moving beyond capitalism, he shows, is no longer a utopian dream. This is the first time in human history in which, equipped with an understanding of what is happening around us, we can predict and shape, rather than simply react to, seismic change.

Ecological crisis signals the death knell for an economic system that was already profoundly failing us, as Paul Mason mercilessly illustrates in these pages. Building on a remarkable career's worth of reporting on the frontlines of global capitalism and worker resistance, this book is an original, engaging, and bracingly-articulated vision of real alternatives. It is sure to many spark vigorous debates, and they are precisely the ones we should be having. -- Naomi Klein
Mason weaves together varied intellectual threads to produce a fascinating set of ideas... the thesis about "postcapitalism" deserves a wide readership among right and left alike... Politicians of all stripes should take note. And so should the people who vote for them. -- Gillian Tett * Financial Times *
Deeply engaging... Mason is asking the most interesting questions, unafraid of where they might lead. What's more, he writes with freshness and insight on almost every page... I can't remember the last book I read that managed to carve its way through the forest of political and economic ideas with such brio... as a spark to the imagination, with frequent x-ray flashes of insight into the way we live now, it is hard to beat. In that sense, Mason is a worthy successor to Marx. -- David Runciman * Guardian *
After postmodernism and all other fashionable post-trends, Mason fearlessly confronts the only true post-, postcapitalism. While we can see all around us ominous signs of the impasses of global capitalism, it is perhaps more than ever difficult to imagine a feasible alternative to it. How are we to deal with this frustrating situation? Although Mason's book is irresistibly readable, this clarity should not deceive us: it is a book which compels us to think! -- Slavoj Zizek
Postcapitalism is a groundbreaking book, both staggering in its ambition, and brilliantly executed... It's both a visionary and landmark work, and the most important book about our economy and society to be published in my lifetime -- Irvine Welsh * Bella Caledonia *

Paul Mason is an award-winning writer, broadcaster, and film-maker. Previously economics editor of Channel 4 News, his books include PostCapitalism, Why It's Kicking Off Everywhere: the New Global Revolutions; Live Working Die Fighting; and Rare Earth: A Novel.

GOR006916037
PostCapitalism: A Guide to Our Future by Paul Mason
Paul Mason
Used - Very Good
Hardback
Penguin Books Ltd
2015-07-30
368
1846147387
9781846147388
N/A
Book picture is for illustrative purposes only, actual binding, cover or edition may vary.
This is a used book - there is no escaping the fact it has been read by someone else and it will show signs of wear and previous use. Overall we expect it to be in very good condition, but if you are not entirely satisfied please get in touch with us.