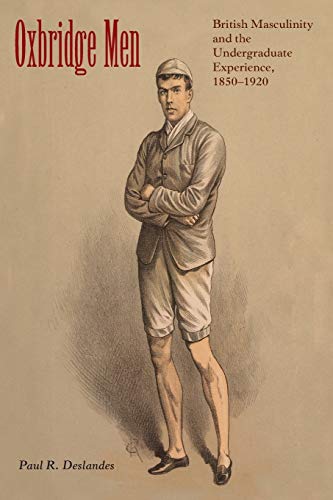 The mythic status of the Oxbridge man at the height of the British Empire continues to persist in depictions of this small, elite world as an ideal of athleticism, intellectualism, tradition, and ritual. In his investigation of the origins of this myth, Paul R. Deslandes explores the everyday life of undergraduates at Oxford and Cambridge to examine how they experienced manhood. He considers phenomena such as the dynamics of the junior common room, the competition of exams, and the social and athletic obligations of intercollegiate boat races to show how rituals, activities, relationships, and discourses all contributed to gender formation. Casting light on the lived experience of undergraduates, Oxbridge Men shows how an influential brand of British manliness was embraced, altered, and occasionally rejected as these students grew from boys into men.

'Oxbridge Men' is an impressive achievement which combines the very latest in gender theory with some very serious scholarly research. It will be of interest to all those working on Oxbridge, on English education, and on modern masculinity more generally.April 2006

Paul Deslandes has written a highly readable and informative book about the creation of an elite masculine culture at Oxford and Cambridge during the late nineteenth and early twentieth centuries. . . Deslandes is fascinated by the way acceptance at one of the 'Oxbridge' colleges becomes a passport to elite status and cultural clout.2007

* Journal of Colonialism and Colonial History *

This is a very useful social history of an important elite group that has previously been comparatively neglected, except in the much more limited college histories. These were the men who, to a considerable extent, were in charge of much of the world during the period covered.Sept. 2007

Deslandes's principal sources-student magazines and periodicals-capture well the varsity ethos with its mingling of pompous self-importance and youthful high-jinks. . . This book captures well the rhythms and rituals of undergraduate life.December 2006

A very welcome book that certainly reaffirms-with new material and approaches-that the entrance of women into the world of the historical university was arguably the most revolutionary event in the long social history of a special kind of institution.Autumn 2006

'Oxbridge Men' is a substantial study of two very important British institutions that is augmented by its reading . . . against broader domestic and imperial concerns to show the resonances that existed between empire and nation . . . and Oxford and Cambridge . . . Most important, it is a significant achievement because it opens our eyes to the lived experience of Oxbridge undergraduates . . . making their way through the halls of these two important institutions . . . .Jan. 2006

Paul R. Deslandes is Associate Professor of History at the University of Vermont.