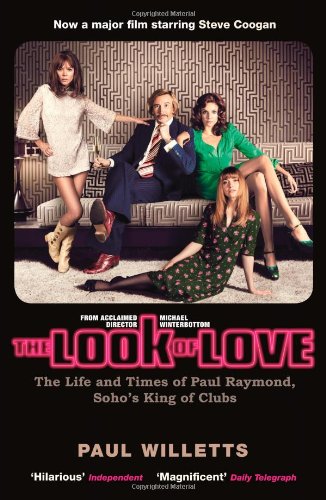 The Look of Love
by Paul Willetts

The Look of Love Summary

The Look of Love: The Life and Times of Paul Raymond, Soho's King of Clubs by Paul Willetts

Customer Reviews - The Look of Love

The Look of Love Reviews

A triumph of research and patient industry, full of arresting incident and sub-celebrity walk-ons ... and wonderful bits of period detail * Independent on Sunday *
A well-researched book, covering an exceptionally interesting slice of social history * Sunday Times *
Willetts has done a magnificent job * Daily Telegraph *
It documents a fascinating turning point in social history - the transition between grim post-war Britain and the swinging Sixties ... hilarious ... * Independent *
[A] vivid portrait of the man who was, to all intents and purposes, Mr Soho. This fascinating study is as much a history of London's square mile of vice as an account of one man's life... Thoroughly researched and extremely well written, this is an impressive book. Not since John Dickie's Cosa Nostra have I read anything that exerts such hypnotic fascination for its sometimes repellent subject. -- Catharine Arnold * Observer *
Paul Willetts skilfully teases back the curtains draped around Britain's pioneering pornographer... what really hits the spot is the way Willetts evokes Soho's tacky allure and charts the guilt-ridden British attitudes to sex that allowed a cynical player to prosper. -- Keith Watson * Metro *
Extraordinary * Daily Express *
Willetts is good on the way attitudes and the law changed in regard to porn over the years, and on the shifting face of Soho. He is a brisk and witty writer, with an eye for quirky detail... extremely diverting. -- Nick Curtis * Evening Standard *
Very striking, very strange and altogether fascinating -- Richard Holmes, author of The Age of Wonder
All is revealed in this straightforward yet queerly affecting account. -- Paul Burston * Time Out *
Brilliant... Willetts' tone of amused detachment is pitched just right, making for some truly hilarious passages. -- Simon Evans * Choice *
A fantastically rich portrait of Soho and the post-war period. -- Travis Elborough * BBC Radio 5 Live Up All Night *
An intelligent, carefully researched book which is humorous but never cheap. It is full of pleasing details... Anyone who wants to study underworlds, Soho history, sexual chauvinism and repression, the self-deception and stupidity of censors, police corruption of the techniques of property speculation should read this book -- Richard Davenport-Hines * TLS *
A thoroughly entertaining story, told by a writer with an extremely vivid and amusing turn of phrase. * Steve Coogan, star of the film adaptation of The Look of Love *
A magnificent biography. -- John Walsh * Independent *
Mr Willetts is an entertaining and witty writer and he sets down Paul Raymond's life with verve and panache. * The Chap *
There are plenty of laugh-out-loud moments in this well-researched biography [that]... inspired the soon-to-be-released film, but goes further into the maverick's fascinating life. * Glamour magazine (online) *
A fascinating book * Edgar Wright, director of Scott Pilgrim v The World *
For those of us who experienced Soho in the 60s and 70s, Paul Willetts' book, Members Only will immediately take us back to the excitement of these golden years. * Erotic Review *
Willetts tells Raymond's story in great detail with neither prurience nor sententious moralising, indeed, with witty detachment. It lets you judge for yourself. -- Peter Lewis * Daily Mail *

Paul Willetts is the author of Fear and Loathing in Fitzrovia and North Soho 999. He's edited four collections of writing by the bohemian dandy, Julian Maclaren-Ross, and has also compiled Teenage Flicks, a jokey celebration of Subbuteo, featuring contributions by Will Self, Graham Taylor, David Baddiel and others. His journalism has appeared in the Independent, The Times, TLS, Spectator, Independent on Sunday and other publications.

GOR004835834
The Look of Love: The Life and Times of Paul Raymond, Soho's King of Clubs by Paul Willetts
Paul Willetts
Used - Very Good
Paperback
Profile Books Ltd
2013-04-04
496
1846687160
9781846687167
N/A
Book picture is for illustrative purposes only, actual binding, cover or edition may vary.
This is a used book - there is no escaping the fact it has been read by someone else and it will show signs of wear and previous use. Overall we expect it to be in very good condition, but if you are not entirely satisfied please get in touch with us.