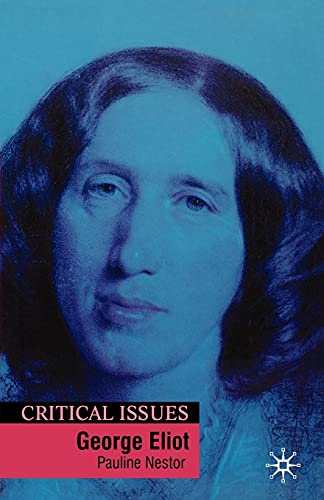 In Stock
$14.49
+10% GST
Covering all of George Eliot's novels, this book offers a challenging re-assessment of the writer's contribution to the critical debates of her own period and of our time.
Very Good
Only 1 left

George Eliot was one of the great thinkers of her time, a figure central to the main currents of thought and belief in the nineteenth century. Yet when this distinguished public intellectual turned to fiction writing at the age of thirty-six, she regarded it not as a lesser pursuit, but as the distillation of all of her knowledge and ideas. For Eliot, fiction enabled the consideration of life 'in its highest complexity', and had the capacity not merely to elicit, but actually to create, moral sentiment by surprising readers into the recognition of realities other than their own.

In this new study, Pauline Nestor offers a challenging reassessment of Eliot's contribution to the critical debates, both of her age and of her own era. In particular, she examines the author's literary expolration of ethics, especially in relation to the negotiation of difference. Nestor argues compellingly that, through a reading of their sophisticated drama of otherness, Eliot's novels can be seen as freshly relevant to contemporary theoretical debates in feminism, moral philosophy, post-colonial studies and psychoanalysis.

Covering the writer's complete body of major fiction, this is an indispensable voume for anyone studying the work of one of the most important and influential novelists of the nineteenth century.

'Useful up-to-date critical survey, written in accessible but scholarly way.' - Clare Pettit, Newnham College, Cambridge 'This useful and incisive book does an excellent job of introducing Eliot to readers unfamiliar with her work...' - S.F. Klepetar, Choice '...well-written and based on close readings of the texts...characterized by accessible, detailed and interesting analyses of the stories and novels. Suitable for readers not familiar with the whole of Eliot's canon, therefore, it also offers the specialist the added bonus of lucidly tracing Eliot's evolving insight into individuals and groups negotiating difference - and proving that such ideas remain important.' - A. G. van den Broek, Forest School, The George Eliot Reviews

PAULINE NESTOR is Associate Professor in English at Monash University, Melbourne, Australia. She is the author of a number of critical studies of Charlotte Bronte, and is the editor of Villette, also published by Palgrave, as part of the New Casebooks series.

Acknowledgements.- Introduction.- The Making of a Novelist.- 'My first bit of art': Scenes of Clerical Life.- Self-regulation and the Limits of Subjectivity: Adam Bede.- 'A widening psychology': The Mill on the Floss.- The Mystery of Otherness: Silas Marner.- Between Two Worlds: Romola
A Politics of Morality: Felix Holt.- 'The difficult task of knowing another soul': Middlemarch.- 'The transmutation of the self': Daniel Deronda.- Conclusion.- Index.

GOR003594673
George Eliot by Pauline Nestor
Pauline Nestor
Critical Issues
Used - Very Good
Paperback
Macmillan Education UK
2002-05-30
192
0333722019
9780333722015
N/A
Book picture is for illustrative purposes only, actual binding, cover or edition may vary.
This is a used book - there is no escaping the fact it has been read by someone else and it will show signs of wear and previous use. Overall we expect it to be in very good condition, but if you are not entirely satisfied please get in touch with us.