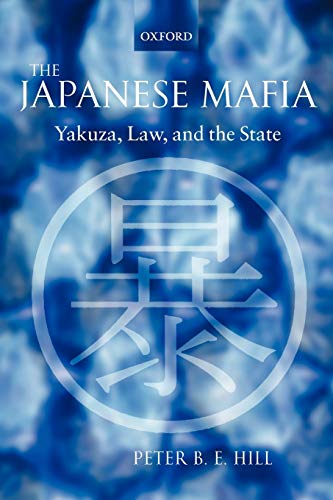 Out of Stock
$69.99
inc. GST
The Japanese mafia - known collectively as yakuza - has had a considerable influence on Japanese society over the past fifty years. Based on extensive interviews with criminals, police officers, lawyers, journalists, and academics, this is the first academic analysis in English of Japan's criminal syndicates.
Very Good
Only 0 left

The Japanese Mafia: Yakuza, Law, and the State by Peter B.E. Hill

The Japanese mafia - known collectively as yakuza - has had a considerable influence on Japanese society over the past fifty years. Based on extensive Japanese language source material and interviews with criminals, police officers, lawyers, journalists, and scholars, this is the first English language academic monography to analyse Japan's criminal syndicates. Peter Hill argues that the essential characteristic of Japan's criminal syndicates is their provision of protection to consumers in Japan's under- and upper-worlds. In this respect they are analogous to the Sicilian Mafia, and the mafias of Russia, Hong Kong, and the United States. Although the yakuza's protective mafia role has existed at least since the end of the Second World War, and arguably longer, the range of economic transactions to which such protection has been afforded has not remained constant. The yakuza have undergone considerable change in their business activities over the last half-century. The two key factors driving this evolution have been the changes in the legal and law enforcement environment within which these groups must operate, and the economic opportunities available to them. This first factor demonstrates that the complex and ambiguous relationship between the yakuza and the state has always been more than purely symbiotic. With the introduction of the boryokudan (Iyakuza) countermeasures law in 1992, the relationship between the yakuza and the state has become more unambiguously antagonistic. Assessing the impact of this law is, however, problematic; the contemporaneous bursting of Japan's economic bubble at the beginning of the 1990s also profoundly and adversely influenced yakuza sources of income. It is impossible to completely disentangle the effects of these two events. By the end of the twentieth century, the outlook for the yakuza was bleak and offered no short-term prospect of amelioration. More profoundly, state-expropriation of protection markets formerly dominated by the yakuza suggests that the longer-term prospects for these groups are bleaker still: no longer, therefore, need the yakuza be seen as an inevitable and necessary evil.

Review from previous edition Peter Hill, a British researcher with first-hand knowledge of Japanese society, offers a remarkable insight into the structures and workings of this mysterious organisation ... The book is as fascinating as it is informative. * Journal of the Commonwealth Lawyers' Association *
In this superb book Peter Hill challenges prevailing interpretations of the yakuza and in doing so explores the pathology and dynamism of contemporary Japan ... Hill writes with authority and panache, demonstrating a command of the literature while alerting readers to the pitfalls of various data. In looking under this rock, he tells a compelling story about Japan's underworld, showing us how it is far more significant, and rapidly changing, than is commonly assumed. A wry wit and judicious doses of colorful anecdotes leavens this complex and revisionist interpretation of the relationship between the yakuza, law and the state. * Japan Times *
The Japanese Mafia is an exceptional piece of scholarship in an area that has needed such a work for a long time. The book will appeal to academics from across the disciplines and to policymakers and practitioners interested in the challenges posed by organized crime. * Journal of Japanese Studies *
I cannot recommend this book highly enough to any one with an interest in the interplay of culture, crime, and law. * The Law and Politics Book Review *

GOR005285378
The Japanese Mafia: Yakuza, Law, and the State by Peter B.E. Hill
Peter B.E. Hill
Used - Very Good
Paperback
Oxford University Press
2006-01-26
336
0199291616
9780199291618
N/A
Book picture is for illustrative purposes only, actual binding, cover or edition may vary.
This is a used book - there is no escaping the fact it has been read by someone else and it will show signs of wear and previous use. Overall we expect it to be in very good condition, but if you are not entirely satisfied please get in touch with us.