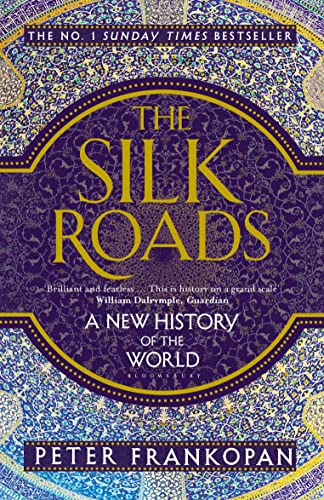 The Silk Roads
by Peter Frankopan

The Silk Roads: A New History of the World by Peter Frankopan

For centuries, fame and fortune was to be found in the west - in the New World of the Americas. Today, it is the east which calls out to those in search of adventure and riches. The region stretching from eastern Europe and sweeping right across Central Asia deep into China and India, is taking centre stage in international politics, commerce and culture - and is shaping the modern world. This region, the true centre of the earth, is obscure to many in the English-speaking world. Yet this is where civilization itself began, where the world's great religions were born and took root. The Silk Roads were no exotic series of connections, but networks that linked continents and oceans together. Along them flowed ideas, goods, disease and death. This was where empires were won - and where they were lost. As a new era emerges, the patterns of exchange are mirroring those that have criss-crossed Asia for millennia. The Silk Roads are rising again. A major reassessment of world history, The Silk Roads is an important account of the forces that have shaped the global economy and the political renaissance in the re-emerging east.

The axis of history writing seemed to shift east with Frankopan's sweeping history, which placed the Silk Road at the very centre of world events -- Books of the Decade * Sunday Times *
Many books have been written which claim to be "A New History of the World". This one fully deserves the title...It is difficult, in a short review, to do justice to a book so ambitious, so detailed and so fascinating as this one -- Gerald DeGroot * The Times *
A book that roves as widely as the geography it describes, encompassing worlds as far removed as those of Herodotus and Saddam Hussein, Hammurabi and Hitler...It is a tribute to Frankopan's scholarship and mastery of sources in multiple languages that he is as sure-footed on the ancient world as he is on the medieval and modern -- Justin Marozzi * Sunday Times *
My book of the year: history on a grand scale, with a sweep of ambition that is rare ... A remarkable book on many levels, and one that anyone would have been proud to write: a proper historical epic of dazzling range, ambition and achievement -- William Dalrymple * Observer *
The most illuminating book of the year ... A healthy antidote to Eurocentric accounts of history -- Books of the Year * Times Literary Supplement *
Splendid ... tightly researched ... invigorating and profound with enough storytelling to excite the reader and enough fresh scholarship to satisfy the intellect...charismatic and essential -- Bettany Hughes * Daily Telegraph *
A rare book that makes you question your assumptions about the world * Wall Street Journal *
Dazzlingly good * Evening Standard *
Based on astonishingly wide and deep reading and in all areas draws on the latest research... It is full of vivid and recondite details * Independent *
Full of intriguing insights and fascinating details * Observer *
With extraordinary erudition and a vivid style, he takes us on a dazzling tour of these parts from the rise of the first empires right through to the present * Open (Weekly) *
Beautifully constructed, a terrific and exhilarating read and a new perspective on world history -- Averil Cameron * History Today *
As well-written, entertaining, disturbing and exciting as a detective story * Svenska Dagbladet *
A dazzling piece of historical writing * South China Morning Post *
This book lives up to its claim to be a new history of the world because of its geopolitical paradigm shift ... He is a Herodotus of the twenty first century * Irish Left Review *
Monumental...prodigious...astonishing. Frankopan is an exhilarating companion for the journey along the routes which conveyed silk, slaves, ideas, religion, and disease, and around which today may hang the destiny of the world * Vanity Fair *
An exceptional storyteller ... Frankopan does a superb job of explaining the history that has led to this modern era of new Silk Roads running across "the spine of Asia."... Frankopan's book will be indispensable to anyone who wants to make sense of this union of past and present * Dallas Morning News *
Sumptuous, intriguing and surprising -- Sir Paddy Ashdown
'A big book like this would have taken the whole year to read if I had followed up every reference that piqued my interest' -- Readers' Books of the Year 2016 * Guardian *

Peter Frankopan is Professor of Global History at Oxford University, where he is also Senior Research Fellow at Worcester College, Oxford and Director of the Oxford Centre for Byzantine Research. He took a First in History and was Schiff Scholar at Jesus College, Cambridge, before completing his doctorate at Oxford, where he was Senior Scholar at Corpus Christi College. He has lectured at leading universities all over the world, including Cambridge, Yale, Harvard, Princeton, NYU, King's College London and the Institute of Historical Research. His revised translation of The Alexiad by Anna Komnene was published in 2009 and The First Crusade was published in 2012.

GOR007827068
The Silk Roads: A New History of the World by Peter Frankopan
Peter Frankopan
Used - Like New
Paperback
Bloomsbury Publishing PLC
2016-06-01
656
1408839997
9781408839997
N/A
Book picture is for illustrative purposes only, actual binding, cover or edition may vary.
This is a used book - there is no escaping the fact it has been read by someone else and it will show signs of wear and previous use. Overall we expect it to be in very good condition, but if you are not entirely satisfied please get in touch with us.