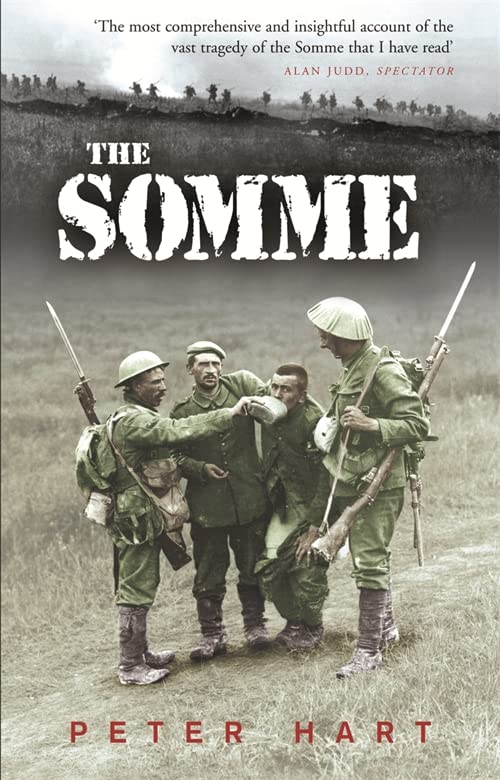 The Somme
by Peter Hart

Used Price
$23.49
inc. GST
Free Shipping in Australia
A major new history of the most infamous battle of the First World War, as described by the men who fought it.
Reviews:
Trustpilot
Very Good

The Somme by Peter Hart

A major new history of the most infamous battle of the First World War, as described by the men who fought it.

On 1 July 1916, Douglas Haig's army launched the 'Big Push' that was supposed finally to bring an end to the stalemate on the Western Front. What happened next was a human catastrophe: scrambling over the top into the face of the German machine guns and artillery fire, almost 20,000 British and Commonwealth soldiers were killed that day alone, and twice as many wounded - the greatest loss in a single day ever sustained by the British Army. The battle did not stop there, however. It dragged on for another 4 months, leaving the battlefield strewn with literally hundreds of thousands of bodies.

The Somme has remained a byword for the futility of war ever since. In this major new history, Peter Hart describes how the battle looked from the point of view of those who fought it. Using never-before-seen eyewitness testimonies, he shows us this epic conflict from all angles. We see what it was like to crawl across No Man's Land in the face of the German guns, what it was like for those who stayed behind in the trenches - the padres, the artillerymen, the doctors. We also see what the battle looked like from the air, as the RFC battled to keep control of the skies above the battlefield. All this is put in the context of the background to the battle, and Haig's overall strategy for the Western Front, making this the most comprehensive history of the battle since Lyn MacDonald's bestselling work over 20 years ago.

Nigel Steel is head of the Imperial War Museum's Research and Information Department. He and Peter Hart have collaborated on several titles, including works on Gallipoli, Passchendaele and the First World War in the air.

Peter Hart was born in 1955. He went to Liverpool University before joining the Sound Archive at the Imperial War Museum in 1981. He is now Oral Historian at the Archive.

GOR001658996
The Somme by Peter Hart
Peter Hart
Used - Very Good
Paperback
Orion Publishing Co
2006-06-15
608
0304367354
9780304367351
N/A
Book picture is for illustrative purposes only, actual binding, cover or edition may vary.
This is a used book - there is no escaping the fact it has been read by someone else and it will show signs of wear and previous use. Overall we expect it to be in very good condition, but if you are not entirely satisfied please get in touch with us.