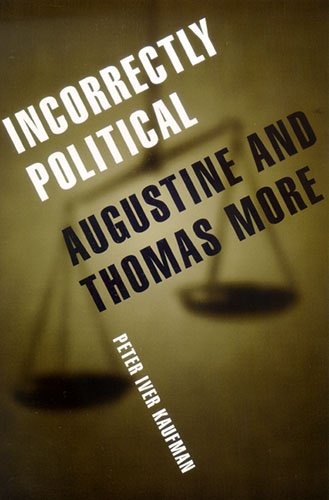 In Stock
$16.49
+10% GST
Augustine in the fourth and fifth centuries and Thomas More in the sixteenth were familiar with the deceits and illusions. This book explains how and why we have failed to appreciate Augustine's and More's profound political pessimism, reintroducing readers to two of the Christian tradition's most enigmatic yet influential figures.
Very Good
Only 1 left

Augustine in the fourth and fifth centuries and Thomas More in the sixteenth were familiar with the deceits and illusions that enabled even the most vile rulers to shore up their dignity and that gave repressive regimes an inviolability of sorts. Both men knew the politics of their times, both were involved in politics, and both were at one time politically ambitious. Augustine needed and made good use of government's powers of coercion and damage control in his struggle against the Donatists. The clear advantages of political protection and correction preoccupied More in his battle against Martin Luther. Both later changed their minds and believed, finally, that the political imagination, based as it is on a desire for power, always and inevitably leads to devastation and suffering. Peter Iver Kaufman explains how and why we have failed to appreciate Augustine's and More's profound political pessimism, reintroducing readers to two of the Christian tradition's most enigmatic yet influential figures. Each had been disturbed by the reach of his own political ambitions - as by those of contemporaries. Each knew that government was useful - yet always deceitful. And each wrote a classic - widely read to this day, Augustine's ""City of God"" and More's ""Utopia"", as well as abundant correspondence and polemical tracts to explain why government on earth might be used, though never meaningfully improved.

"Incorrectly Political is a well-researched and frequently insightful analysis of two paralleled classics, the City of God by Augustine of Hippo and Utopia by Thomas Moore. These dissimilar volumes are united under Kaufman's investigation of their respective expressions of Christian optimism vs. pessimism concerning political action as a means to an authentically good end in this world. The journey through this unique interpretation of two brilliant pilgrims is surely worth the effort." --Sixteenth Century Journal, vol. XXXIX, no. 4 (Winter 2008)
"Kaufman analyzes and reflects on the life and writings in political context of two Christian thinkers from very different epochs in order to determine not so much their systematic political philosophies as their attitudes toward political involvement and the betterment of society. . . . This is an intriguing book in which the author risks writing comparatively about figures from two very different times, revealing mastery of sources and secondary literature in both, and a willingness to make broad judgments. Like good books generally, it can rearrange a reader's perceptions." --Church History, vol. 77, issue 1, March 2008
"This is an important book at a time of expansion of state power in the 'war against terrorism' and the emphasis on the role of religion in American political life. This is truly a superb scholarly work and highly recommended for anyone interested in the issue of faith and politics." --Catholic Library World, Volume 78, Number 1, September 2007

PETER IVER KAUFMAN is professor of history and religious studies at the University of North Carolina, Chapel Hill. He is the author of Thinking of the Laity in Late Tudor England (Notre Dame Press, 2004).

GOR009700087
Incorrectly Political: Augustine and Thomas More by Peter Iver Kaufman
Peter Iver Kaufman
Used - Very Good
Paperback
University of Notre Dame Press
2007-01-15
272
0268033145
9780268033149
N/A
Book picture is for illustrative purposes only, actual binding, cover or edition may vary.
This is a used book - there is no escaping the fact it has been read by someone else and it will show signs of wear and previous use. Overall we expect it to be in very good condition, but if you are not entirely satisfied please get in touch with us.