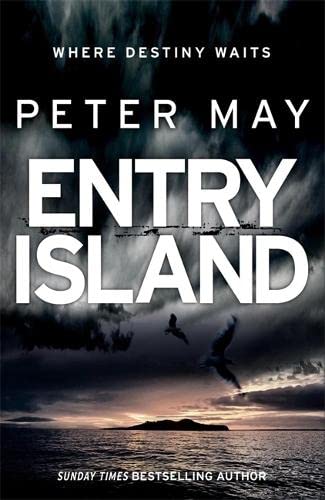 Entry Island
by Peter May

Used Price
$28.49
inc. GST
Free Shipping in Australia
Detective Sime Mackenzie is haunted by the feeling he knows the woman named as murder suspect - despite the fact they have never met. A standalone thriller from the author of the Lewis Trilogy.
Reviews:
Trustpilot
Like New Very Good

Entry Island by Peter May

IF YOU FLEE FATE...When Detective Sime Mackenzie is sent from Montreal to investigate a murder on the remote Entry Island, 850 miles from the Canadian mainland, he leaves behind him a life of sleeplessness and regret. FATE WILL FIND YOU...But what had initially seemed an open-and-shut case takes on a disturbing dimension when he meets the prime suspect, the victim's wife, and is convinced that he knows her - even though they have never met. And when his insomnia becomes punctuated by dreams of a distant Scottish past in another century, this murder in the Gulf of St. Lawrence leads him down a path he could never have foreseen, forcing him to face a conflict between his professional duty and his personal destiny.

Praise for Peter May:

He is a terrific writer doing something different.

-- Mark Billingham
From the first page I knew I was in safe hands. I knew I could trust this writer. -- Sophie Hannah
Wonderfully compelling. -- Kate Mosse
A true pleasure to read. * Guardian *
Peter May is a writer I'd follow to the ends of the earth. * New York Times *
One of the best regarded crime series of recent years. * Independent, on the Lewis trilogy *
Lyrical, empathetic and moving. -- Alex Gray
A wonderfully complex book. -- Peter James, on Entry Island
May's novels are strong on place and the wounds left by old relationships. * Sunday Times *
Will have the reader relishing every tendency of description and characterization. -- Barry Forshaw * Independent *
Dark, exciting and atmospheric. * Scotland on Sunday *
Powerful and authentic. * Scotland on Sunday *

Peter May was born and raised in Scotland. He was an award-winning journalist at the age of twenty-one and a published novelist at twenty-six. When his first book was adapted as a major drama series for the BCC, he quit journalism and during the high-octane fifteen years that followed, became one of Scotland's most successful television dramatists. He created three prime-time drama series, presided over two of the highest-rated serials in his homeland as script editor and producer, and worked on more than 1,000 episodes of ratings-topping drama before deciding to leave television to return to his first love, writing novels. He has won several literature awards in France, received the USA's Barry Award for The Blackhouse, the first in his internationally bestselling Lewis Trilogy; and in 2014 was awarded the ITV Specsavers Crime Thriller Book Club Best Read of the Year award for Entry Island. Peter now lives in South-West France with his wife, writer Janice Hally.

GOR005397304
Entry Island by Peter May
Peter May
Used - Like New
Hardback
Quercus Publishing
2013-12-26
544
1782062203
9781782062202
Winner of ITV3 Crime Thriller Book Club Best Read 2014
Book picture is for illustrative purposes only, actual binding, cover or edition may vary.
The book has been read, but looks new. The book cover has no visible wear, and the dust jacket is included if applicable. No missing or damaged pages, no tears, possible very minimal creasing, no underlining or highlighting of text, and no writing in the margins.