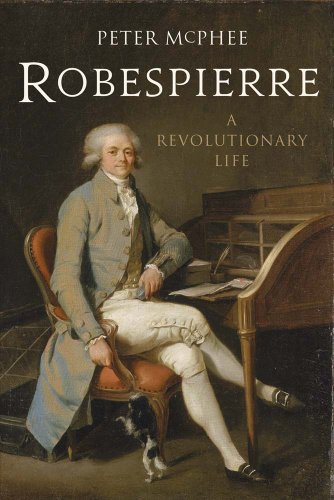 Used Price
29,99 $
inc. GST
Free Shipping in Australia
For some historians and biographers, Maximilien Robespierre (1758-94) was a great revolutionary martyr who succeeded in leading the French Republic to safety in the face of overwhelming military odds. This biography focuses on Robespierre's formative years and the development of an iron will in a frail boy conceived outside wedlock.
Reviews:
Trustpilot
Like New Very Good

An intimate new portrait of one of history's most controversial figures: heroic revolutionary or the first terrorist?

For some historians and biographers, Maximilien Robespierre (1758-94) was a great revolutionary martyr who succeeded in leading the French Republic to safety in the face of overwhelming military odds. For many others, he was the first modern dictator, a fanatic who instigated the murderous Reign of Terror in 1793-94. This masterful biography combines new research into Robespierre's dramatic life with a deep understanding of society and the politics of the French Revolution to arrive at a fresh understanding of the man, his passions, and his tragic shortcomings.

Peter McPhee gives special attention to Robespierre's formative years and the development of an iron will in a frail boy conceived outside wedlock and on the margins of polite provincial society. Exploring how these experiences formed the young lawyer who arrived in Versailles in 1789, the author discovers not the cold, obsessive Robespierre of legend, but a man of passion with close but platonic friendships with women. Soon immersed in revolutionary conflict, he suffered increasingly lengthy periods of nervous collapse correlating with moments of political crisis, yet Robespierre was tragically unable to step away from the crushing burdens of leadership. Did his ruthless, uncompromising exercise of power reflect a descent into madness in his final year of life? McPhee reevaluates the ideology and reality of "the Terror," what Robespierre intended, and whether it represented an abandonment or a reversal of his early liberalism and sense of justice.

"Peter McPhee seeks to get under the skin and into the mind of Robespierre, juxtaposing personal and political factors in a gripping narrative. Robespierre emerges less as the man who ruined the Revolution than as a man the Revolution ruined-by the time of his death in 1794 he was an ailing exhausted husk very different from the bright-eyed, committed and courageous politician of 1789. McPhee's interpretation will surprise and intrigue in equal measure."-Colin Jones -- Colin Jones
'A wonderful, convincing study, splendidly analytical and evocative, and beautifully penned.' - John Merriman, author of A History of Modern Europe and Dynamite Club: How a Bombing in Fin-de-siecle Paris Ignited the Age of Modern Terror -- John Merriman
'This book is a triumph: an important, open-minded and often moving account of Robespierre, that will stand as a very worthy successor to the previous great biographies. Peter McPhee's lifetime of research on the French Revolution draws out the context within which Robespierre's words and actions can be better understood, and his insights into Robespierre's youth, and the way he changed, displays a real understanding of Robespierre's psychology. A great and lasting achievement.' - Marisa Linton, author of The Politics of Virtue in Enlightenment France -- Marisa Linton

Peter McPhee is a professorial fellow at the University of Melbourne. He lives in Abbottsford, Australia.

GOR011103457
Robespierre: A Revolutionary Life by Peter McPhee
Peter McPhee
Used - Like New
Paperback
Yale University Press
2013-10-01
320
0300197241
9780300197242
N/A
Book picture is for illustrative purposes only, actual binding, cover or edition may vary.
The book has been read, but looks new. The book cover has no visible wear, and the dust jacket is included if applicable. No missing or damaged pages, no tears, possible very minimal creasing, no underlining or highlighting of text, and no writing in the margins.