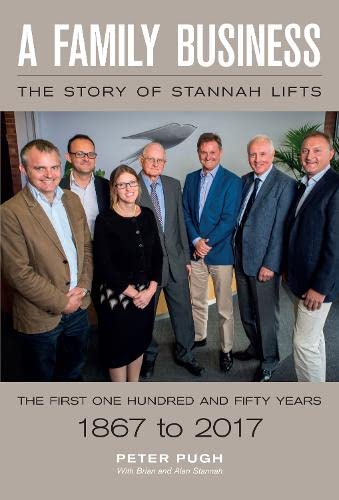 A Family Business: The Story of Stannah Lifts by Peter Pugh

A Family Business: The Story of Stannah Lifts: The First One Hundred and Fifty Years - 1867 to 2017 by Peter Pugh

This is the exciting story of how a family has built a business which has just celebrated its 150th anniversary.

Needless to say, the company has had its difficult moments but the family have stuck to their determination to create high-quality products and provide employment for many people. The current number of employees is no fewer than 2,000.

The Stannah family have also been determined to sell their lifts, stairlifts, escalators and walkways, not only throughout the British Isles but throughout the world. There are subsidiaries in twelve countries as well as over 30 distributorships overseas. Their achievements have been officially recognised by four Queen's Awards. Furthermore, the Stannah family and their employees were thrilled to receive HRH The Prince of Wales who came to their plant in Andover in February 2011 on an official visit.

Not every family business has been successful and even some of the ones that have been have often not looked after their employees in the way the Stannah family have. In 1980 Brian and Alan Stannah introduced a Performance Plan. The first payout was GBP50,000 and this grew steadily to reach over GBP2 million a year in the last 20 years so that the total reward on top of salaries by 2016 was over GBP50 million. When asked 'Does it not bother you that you and your brother would be GBP50,000 better off if you hadn't set up that scheme?', Brian Stannah replied 'I think we'd be worse off.'

This is a book about Stannah, a family business founded in 1867 and therefore 150 years old in 2017.
The family aspect is very important. The five generations since the company was founded by Joseph Stannah have all worked in the business.
The first half of the 20th century meant survival through two world wars and difficult economic circumstances in the 1920s and 30s. Leslie Stannah, known as 'Pop', kept the business going in the 1940s and 50s and Brian and Alan Stannah when they took over in the 1960s embarked on over 50 years of sustained growth.

They moved the factory from central London to Andover in the early 1970s and diversified into Microlifts, Homelifts and, most importantly, Stairlifts. They also grew the export side of the business and were rewarded with winning four Queen's Awards.

Their five children - Jon, Patrick, Alastair, Nick and Helen - all have senior jobs in the business in 2017, and the company now employs over 2,000 people and is still developing new products.
The Stannah family have been magnificent employers, making sure that every employee is well looked after and, in return, employees have given loyal service - many having worked over 25 and sometimes 40 years for the company. In 2017, Brian and Alan were made Members of the British Empire (MBE), a justified acknowledgement of their achievements as a family business. The UK would benefit greatly from having more such businesses.
Peter Pugh was educated at Oundle and Cambridge, where he read History. He was brought up in a family business atmosphere and has written more than 60 books on business including a three-volume history of Rolls-Royce. He also founded, and is Chairman of, the publishing company, Icon Books Ltd, which has just celebrated its 25th birthday. He is married, has three children and seven grandchildren and lives in Cambridge and Brancaster in Norfolk.
GOR011264575
9781785783609
1785783602
A Family Business: The Story of Stannah Lifts: The First One Hundred and Fifty Years - 1867 to 2017 by Peter Pugh
Peter Pugh
Used - Like New
Hardback
Icon Books Ltd
2018-10-22
230
N/A
Book picture is for illustrative purposes only, actual binding, cover or edition may vary.
The book has been read, but looks new. The book cover has no visible wear, and the dust jacket is included if applicable. No missing or damaged pages, no tears, possible very minimal creasing, no underlining or highlighting of text, and no writing in the margins
Trustpilot