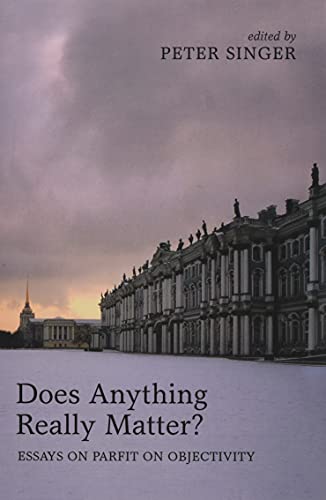 Does Anything Really Matter? by Peter Singer (Princeton UniversityUniversity of Melbourne)

In On What Matters Derek Parfit argues that there are objective moral truths, and other normative truths about what we have reasons to believe, and to want, and to do. He further argues that if he is wrong, nihilism follows, and nothing matters. In Does Anything Really Matter? leading philosophers present a fascinating set of responses to Parfit.

Does Anything Really Matter?: Essays on Parfit on Objectivity by Peter Singer (Princeton UniversityUniversity of Melbourne)

In the first two volumes of On What Matters Derek Parfit argues that there are objective moral truths, and other normative truths about what we have reasons to believe, and to want, and to do. He thus challenges a view of the role of reason in action that can be traced back to David Hume, and is widely assumed to be correct, not only by philosophers but also by economists. In defending his view, Parfit argues that if there are no objective normative truths, nihilism follows, and nothing matters. He criticizes, often forcefully, many leading contemporary philosophers working on the nature of ethics, including Simon Blackburn, Stephen Darwall, Allen Gibbard, Frank Jackson, Peter Railton, Mark Schroeder, Michael Smith, and Sharon Street. Does Anything Really Matter? gives these philosophers an opportunity to respond to Parfit's criticisms, and includes essays on Parfit's views by Richard Chappell, Andrew Huddleston, Katarzyna de Lazari-Radek and Peter Singer, Bruce Russell, and Larry Temkin. A third volume of On What Matters, in which Parfit engages with his critics and breaks new ground in finding significant agreement between his own views and theirs, is appearing as a separate companion volume.
This collection of essays, edited by Peter Singer, is a response by some moral philosophers to Parfits views about ethics, normativity, and meaning. * Janna Thompson (Professor, La Trobe University) Australian Book Review *
Authorative collection. * Kieran Setiya, Times Literary Supplement *
With all of the exchanges that take place in volume 3 and Singer's collection, readers are likely to come away with the favorable impression that philosophy is a highly collaborative enterprise. ... all of the thirty-six authors cited in the bibliography are full professors, the majority of the still living of whom are towering figures in the profession with associations to only a small number of prestigious departments ... while our discipline lost a philosophical giant when Parfit passed away shortly before the publications of volume 3 and Singer's collection, moral philosophy has a bright future ahead of it. * Nicholas Laskowski, Ethics *
Peter Singer is Ira W. DeCamp Professor of Bioethics in the University Center for Human Values at Princeton University, a position that he now combines with the position of Laureate Professor at the University of Melbourne. His books include Animal Liberation, Practical Ethics, The Life You Can Save, The Point of View of the Universe (co-authored with Katarzyna de Lazari-Radek), and The Most Good You Can Do. An Australian, in 2012 he was made a Companion to the Order of Australia, his country's highest civilian honour.
Peter Singer: Preface 1: Larry Temkin: Has Parfit's Life Been Wasted? Some Reflections on Part Six of On What Matters 2: Peter Railton: Two Sides of the Meta-Ethical Mountain? 3: Allan Gibbard: Parfit on Normative Properties and Disagreement 4: Simon Blackburn: All Souls Night 5: Michael Smith: Parfit's Mistaken Metaethics 6: Sharon Street: Nothing 'Really' Matters, but That's Not What Matters 7: Richard Chappell: Knowing What Matters 8: Andrew Huddleston: Nietzsche and the Hope of Normative Convergence 9: Frank Jackson: In Defence Of Reductionism In Ethics 10: Mark Schroeder: What Matters about Metaethics? 11: Bruce Russell: A Defense of Moral Intuitionism 12: Stephen Darwall: Morality, Blame, and Internal Reasons 13: Katarzyna de Lazari-Radek and Peter Singer: Parfit on Objectivity and 'The Profoundest Problem of Ethics'
NGR9780199653836
9780199653836
0199653836
Does Anything Really Matter?: Essays on Parfit on Objectivity by Peter Singer (Princeton UniversityUniversity of Melbourne)
Peter Singer (Princeton UniversityUniversity of Melbourne)
New
Hardback
Oxford University Press
2017-01-27
320
N/A
Book picture is for illustrative purposes only, actual binding, cover or edition may vary.
This is a new book - be the first to read this copy. With untouched pages and a perfect binding, your brand new copy is ready to be opened for the first time
Trustpilot