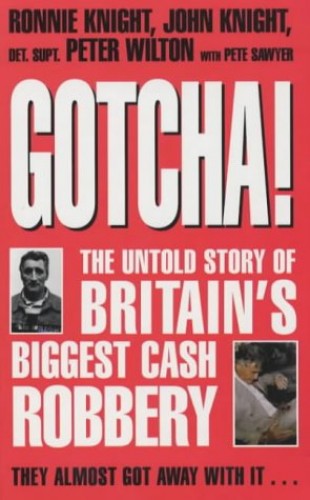 In Stock
$11.49
+10% GST
An exciting crime caper as police and criminals team up for the first time to tell the inside story of the notorious Security Express Robbery.
Very Good
6 in stock

Gotcha!: The Untold Story of Britain's Bigge by Peter Wilton

On Easter Monday 1983 armed robbers got into the supposedly impregnable Security Express depot in Shoreditch, neatly capturing the guards and holding them hostage. They hauled away 5 tons of cash, worth GBP6 million then (GBP26 million in today's currency). The gang made no mistakes and left behind not a single clue.

Det. Supt Peter Wilton was the man in charge of the investigation. He spent years tracking the culprits, playing a ruthless cat and mouse game that led him to some of London's most notorious villains. John Knight and his brother Ronnie were well-known faces, hard men who kept to the East End code. They were riding high when John Knight and his team executed the perfect robbery, and Ronnie helped launder the cash. They almost got away with it...

As gripping as any thriller, Gotcha! combines the Knights' and Wilton's stories to graphically recreate the robbery, from the adrenaline-fuelled raid to the long police search, from the high life on the Costa del Sol to interrogation, betrayal and arrest.

John Knight was a successful businessman, who also happened to be one of London's most successful robbers. Ronnie Knight was once a nightclub owner and was married to Barbara Windsor for many years. Peter Wilton spent 31 years in the Metropolitan police, and was promoted to Detective Superindendent. Pete Sawyer is an investigative journalist and freelance television producer.

GOR001668638
Gotcha!: The Untold Story of Britain's Bigge by Peter Wilton
Peter Wilton
Used - Very Good
Paperback
Pan Macmillan
2003-04-18
416
0330486020
9780330486026
N/A
Book picture is for illustrative purposes only, actual binding, cover or edition may vary.
This is a used book - there is no escaping the fact it has been read by someone else and it will show signs of wear and previous use. Overall we expect it to be in very good condition, but if you are not entirely satisfied please get in touch with us.