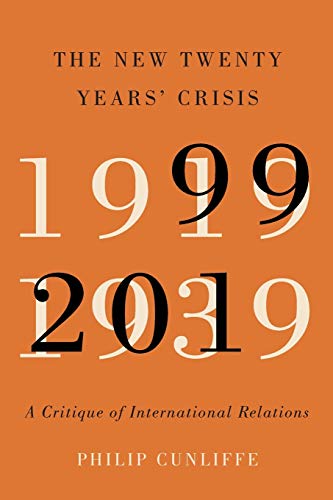 The liberal order is decaying. Will it survive, and if not, what will replace it? On the eightieth anniversary of the publication of E.H. Carr's The Twenty Years' Crisis, 1919-1939, Philip Cunliffe revisits this classic text, juxtaposing its claims with contemporary debates on the rise and fall of the liberal international order

The New Twenty Years' Crisis: A Critique of International Relations, 1999-2019 by Philip Cunliffe

The liberal order is decaying. Will it survive, and if not, what will replace it? On the eightieth anniversary of the publication of E.H. Carr's The Twenty Years' Crisis, 1919-1939, Philip Cunliffe revisits this classic text, juxtaposing its claims with contemporary debates on the rise and fall of the liberal international order.

The New Twenty Years' Crisis reveals that the liberal international order experienced a twenty-year cycle of decline from 1999 to 2019. In contrast to claims that the order has been undermined by authoritarian challengers, Cunliffe argues that the primary drivers of the crisis are internal. He shows that the heavily ideological international relations theory that has developed since the end of the Cold War is clouded by utopianism, replacing analysis with aspiration and expressing the interests of power rather than explaining its functioning. As a result, a growing tendency to discount political alternatives has made us less able to adapt to political change. In search of a solution, this book argues that breaking through the current impasse will require not only dissolving the new forms of utopianism, but also pushing past the fear that the twenty-first century will repeat the mistakes of the twentieth. Only then can we finally escape the twenty years' crisis.

By reflecting on Carr's foundational work, The New Twenty Years' Crisis offers an opportunity to take stock of the current state of international order and international relations theory.

"Books that threaten to shake the foundations of an academic discipline are rare. Rarer still are those that manage to revitalise a figure the discipline had long regarded as consigned to the 'dustbin of history' to level the disciplinary terrain in such a comprehensive and courageous manner as Phillip Cunliffe's The New Twenty Years Crisis. Taking no prisoners, Cunliffe brutally and brilliantly uses E.H. Carr to critique the underlying utopianism of much, if not all, contemporary international relations. Although the book targets the discipline as a whole, the most trenchant critiques are aimed at those parts of the field that consider themselves the most 'critical.' This won't win Cunliffe many friends, but great books would never get written if that was the aim. You may not agree with Cunliffe's conclusions, but if nothing else, he will spark a long-overdue conversation about what it means to be critical. Essential reading for anyone interested in international relations as a field of study, as well as those interested in global order." Colin Wight, The University of Sydney and author of Rethinking Terrorism: Terrorism, Violence and the State

"The New Twenty Years' Crisis offers something different--a Carr for our time. Cunliffe surfaces and pursues Carr's timely warning about the blindness that comes from an elite hostility to mass politics; but he does so with discrimination and without the distorting deference that is sometimes paid to the forefathers of the discipline. The result is a deeply engaged, unapologetically political, and wonderfully readable book." Alison McQueen, Stanford University

"The historian E. H. Carr famously argued in The Twenty Years' Crisis that Western peacemakers at Versailles built the post-World War I order on utopian illusions and liberal aspirations that led two decades later to economic upheaval, authoritarian nationalism, and great-power war. In this lively polemic, Cunliffe contends that in the aftermath of the Cold War, the United States and other democratic states did it again. The book will inspire a useful debate." Foreign Affairs

Philip Cunliffe is senior lecturer in international conflict at the University of Kent.
NGR9780228001027
The New Twenty Years' Crisis: A Critique of International Relations, 1999-2019 by Philip Cunliffe
Philip Cunliffe
New
Paperback
McGill-Queen's University Press
2020-07-16
168
0228001021
9780228001027
N/A
Book picture is for illustrative purposes only, actual binding, cover or edition may vary.
This is a new book - be the first to read this copy. With untouched pages and a perfect binding, your brand new copy is ready to be opened for the first time
Trustpilot