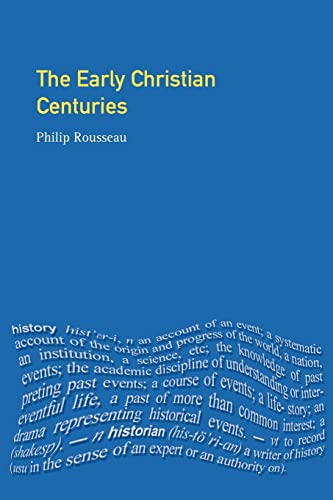 This is a full survey of the first 600 years of Christian history from the world of second-temple Judaism to the Byzantine age, the rise of Islam, and the beginnings of medieval European polities.

Charting the first six hundred years of the Christian movement, THE EARLY CHRISTIAN CENTURIES carries the reader from the world of second-temple Judaism to the Byzantine age, the rise of Islam, and the beginnings of medieval European polities.With a combination of rare tact and acuity, Philip Rousseau takes the measure of a generation of scholarship on early Christianity and the late Roman world. He stresses the importance of shifting historical consciousness, the continuity and development of ideas, and the urge for social respectability. Paying the greatest attention to the 'inner' components of Christian life, the resulting story captures fully the major figures: Paul, the gospel writers, the early 'apologists', and the great figures of the 'patristic' age, including the Cappadocian Fathers, Augustine and Gregory the Great.

'A sweeping work by one of the leading historians of late antiquity. This is early Christianity as it was actually lived and experienced.'

The book of an epoch in more than one sense...This is a work whose huge experience sets the reader free to try the perspectives that open on every page. Colourful in feeling, thought and action, The Early Christian Centuries gives as sharp a sense as one can now imagine having of how Christianity made itself 'part of history'.

' ...the scope of Rousseau's work sets this volume apart... an accurate and articulate treatment of the first 600 years of Christianity.'

Philip Rousseau is Andrew W. Mellon Professor of Early Christian Studies at the Catholic University of America. He is the author of several titles on Christianity and the ancient world.
1. Giving a shape to early Christian history 2. Paul and the Jewish past: an apostle and his world 3. Jesus of Nazareth: portrait of a saviour 4. Individual virtu ate and its social setting 5. Churches as learning communities 6. Heroes and survivors: Christians engage with the world 7. The Christian empire, a contested experiment: Constantine and his successors 8. A crisis of authority 9. An ancient legacy and its post - Roman future Epilogue: The price of success Further bibliography notes and acknowledgements Index
NLS9780582256538
9780582256538
0582256534
The Early Christian Centuries by Philip Rousseau
Philip Rousseau
New
Paperback
Taylor & Francis Ltd
2002-04-12
342
N/A
Book picture is for illustrative purposes only, actual binding, cover or edition may vary.
This is a new book - be the first to read this copy. With untouched pages and a perfect binding, your brand new copy is ready to be opened for the first time
Trustpilot