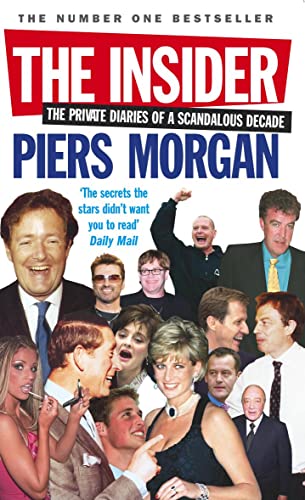 The Insider
by Piers Morgan

In Stock
$15.49
inc. GST
At the age of 28, Piers Morgan was made editor of the "News of the World", the UK's biggest-selling Sunday newspaper. The decade that followed witnessed horrific events like Dunblane, September 11, and the war in Iraq - alongside entertaining sport and celebrity gossip. This book is based on the diaries, which Morgan kept during this period.
Like New Very Good Well Read
Only 1 left

The Insider: The Private Diaries of a Scandalous Decade by Piers Morgan

The Insider dominated the media on publication in March 2005 and instantly became a No.1 bestseller. Not only did it fill thousands of column inches with its revelations about prominent political and showbiz figures, it was critically acclaimed across the broadsheets for its unique and fascinating insight into the worlds of celebrity, royalty, politics and the media.

Piers Morgan was made editor of the News of the World, the UK's biggest-selling Sunday newspaper at the record-breaking age of 28. The decade that followed was one of the most tumultuous in modern times. In a world of indiscreet dinners, private meetings and gossipy lunches, Piers Morgan found himself in the thick of it. His diaries from this remarkable period reveal astonishing and hilarious encounters with an endless list of celebrities and politicians alike: Diana, William, Charles and Camilla; Tony Blair, Cherie, Gordon Brown; Paul McCartney, George Michael and Elton John; Jeremy Clarkson, Paula Yates and Gazza to name just a few.

Entertaining, engaging and compulsive, The Insider was the most talked-about book of 2005, blowing apart every notion we have of politics, media and celebrity.

A right, rollicking good read -- Andrew Neil * Evening Standard *
A riveting read with splendid anecdotes on almost every page * The Times *
This is a book of historical importance -- Peter Oborne * The Spectator *
A compelling read on any level, whether you want to consider the relationship between politics and the press, royal behaviour, the red-top world - or just want a good laugh * Independent *
Funny and fabulously indiscreet, this is a book that holds up a mirror to the spinning and posturing of our celebrity age ... scurrilously entertaining * Observer *

Piers Morgan was born in 1965. He studied journalism at Harlow College, beginning his career in local south London newspapers before being spotted by Kelvin MacKenzie of The Sun and given his own showbiz column, Bizarre. Rupert Murdoch made him Editor of the News of the World in January 1994; he was headhunted two years later to edit The Mirror where he stayed until 2004 when he left following his decision to publish photos of British soldiers apparently abusing Iraqi prisoners of war. He has presented two series of Tabloid Tales for BBC2 and most recently has co-hosted the current affairs show Morgan and Platell on Channel 4.

GOR010578411
The Insider: The Private Diaries of a Scandalous Decade by Piers Morgan
Piers Morgan
Used - Like New
Paperback
Ebury Publishing
2005-09-08
496
0091908493
9780091908492
Short-listed for British Book Awards: Book of the Year 2006
Book picture is for illustrative purposes only, actual binding, cover or edition may vary.
The book has been read, but looks new. The book cover has no visible wear, and the dust jacket is included if applicable. No missing or damaged pages, no tears, possible very minimal creasing, no underlining or highlighting of text, and no writing in the margins.