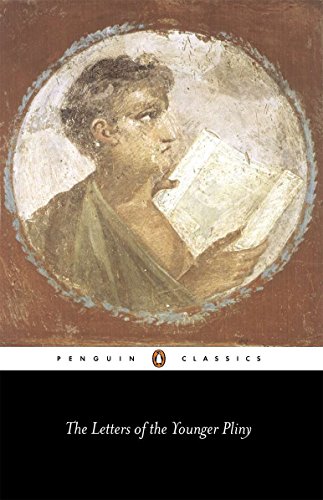 In Stock
$15.99
+10% GST
Presents the author's personal letters that address a range of topics, from an account of his uncle's death in the eruption that engulfed Pompeii, to observations on the early Christians from descriptions of everyday life in Rome, with its scandals and court cases, to his life in the country.
Very Good Good Well Read
6 in stock

The Letters of the Younger Pliny Summary

Providing a series of fascinating views of Imperial Rome, The Letters of the Younger Pliny also offer one of the fullest self-portraits to survive from classical times. This Penguin Classics edition is translated with an introduction by Betty Radice.

A prominent lawyer and administrator, Pliny was also a prolific letter-writer, who numbered among his correspondents such eminent figures as Tacitus, Suetonius and the Emperor Trajan, as well as a wide circle of friends and family. His lively and very personal letters address an astonishing range of topics, from a deeply moving account of his uncle's death in the eruption that engulfed Pompeii, to observations on the early Christians - 'a desperate sort of cult carried to extravagant lengths' - from descriptions of everyday life in Rome, with its scandals and court cases, to Pliny's life in the country.

Betty Radice's definitive edition was the forst complete modern translation of Pliny's letters. In her introduction she examines the shrewd, tolerant and occasionally pompous man who emerges from these letters.

Gaius Plinius Caecilius Secundus (c. 61-113), better known as Pliny the Younger, and nephew of Pliny the Elder, was born in Como, Italy. Beginning his career at the bar when he was eighteen, Pliny managed to emerge unscathed from Domitian's 'reign of terror', even being appointed an official at the treasury. In 103 he was awarded a priesthood in recognition of his distinguished public service, and was prominent in several major prosecutions. His nine books of personal letters were selected by Pliny himself and published during his lifetime, while his official correspondence with Trajan was published as a tenth book after his death and contains a celebrated exchange of letters on the early Christians.

If you enjoyed The Letters of the Younger Pliny, you might like Tacitus' The Annals of Imperial Rome, also available in Penguin Classics.

About Pliny the Younger

A prominent lawyer and administrator, Pliny (c. AD 61-113) was also a prolific letter-writer.
Betty Radice was an honorary fellow of St Hilda's College, Oxford and vice-president of the Classical Association. She was a renowned translator of both Latin and Greek.

GOR001412470
The Letters of the Younger Pliny by Pliny the Younger
Pliny the Younger
Used - Very Good
Paperback
Penguin Books Ltd
1964-01-01
320
0140441271
9780140441277
N/A
Book picture is for illustrative purposes only, actual binding, cover or edition may vary.
This is a used book - there is no escaping the fact it has been read by someone else and it will show signs of wear and previous use. Overall we expect it to be in very good condition, but if you are not entirely satisfied please get in touch with us.