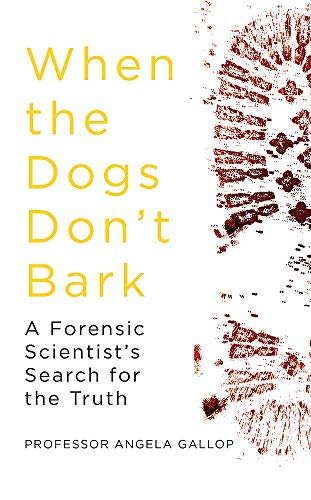 When the Dogs Don't Bark
by Professor Angela Gallop

In Stock
$19.49
inc. GST
The fascinating and compelling memoir by one of the world's leading forensic scientists, Professor Angela Gallop
Like New Very Good
Only 1 left

When the Dogs Don't Bark Summary

When the Dogs Don't Bark: A Forensic Scientist's Search for the Truth by Professor Angela Gallop

'Fascinating. A book that will be essential reading for every aspiring crime writer' Guardian

By the time I arrived at the wood yard in Huddersfield on a bitterly cold night in February 1978, the body of the 18-year-old victim had already been taken to the mortuary.
__________

Never before has criminal justice rested so heavily on scientific evidence. With ever-more sophisticated and powerful techniques at their disposal, forensic scientists have an unprecedented ability to help solve even the most complex cases.

Angela Gallop has been a forensic scientist for over 40 years. After joining the Forensic Science Service, the first crime scene she attended was for a case involving the Yorkshire Ripper. As well as working on a wide range of cases in many countries around the world, she is now the most sought-after forensic scientist in the UK, where she has helped solve numerous high-profile cases, including the investigation that finally absolved the Cardiff Three the Pembrokeshire Coastal Path murders, and the killings of Stephen Lawrence, Damilola Taylor, Rachel Nickell and Roberto Calvi.

From the crime scene to the courtroom, When the Dogs Don't Bark is the remarkable story of a life spent searching for the truth.

'a casebook that reads like The Encyclopedia Of Murder' Daily Express

The compelling memoir from the UK's most eminent forensic scientist and some of the most fascinating criminal investigations she has worked on.

You learnt about forensic pathology with Dr Richard Shepherd in Unnatural Causes and about anthropology with Professor Sue Black in All That Remains. Now it's time to learn about the scene of the crime. . .

When the Dogs Don't Bark Reviews

This is a fascinating scientific memoir of a life dedicated to uncovering the truth behind some of the most shocking crimes. And a book that will be essential reading for every aspiring crime writer. * Guardian *
Offers a chilling glimpse into her life's work. The reader, too, becomes more gripped by the forensic details than the horrors of each case. Fascinating stuff. * Sunday Times *
Gallop's book is compelling * Daily Mirror *
Fascinating * The Sun *
This book is rarely other than compelling and despite her modesty she comes across as admirable as well as likeable. She has a rare combination of qualities - a vivid imagination, a capacity for doggedly carrying out difficult and often mundane work and entrepreneurial nous. But what is even more rare is that she has deployed them in genuinely useful work for the public good * Sunday Express *
One of the profession's leading lights * Woman & Home *

Angela Gallop is one of the world's most eminent forensic scientists. During a career spanning more than 40 years, she has helped to drive change and transformation within the service, both in the UK and abroad. A specialist in cold-case investigations, Angela has led forensic teams to find vital evidence in many of the UK's most challenging cases, including the deaths of Stephen Lawrence, Damilola Taylor, Rachel Nickell, Roberto Calvi and many others.

In 2015, Angela was awarded a CBE for her services to forensic science.

This is her first book.

GOR009725918
When the Dogs Don't Bark: A Forensic Scientist's Search for the Truth by Professor Angela Gallop
Professor Angela Gallop
Used - Like New
Hardback
Hodder & Stoughton
2019-02-21
368
1473678838
9781473678835
N/A
Book picture is for illustrative purposes only, actual binding, cover or edition may vary.
This is a used book - there is no escaping the fact it has been read by someone else and it will show signs of wear and previous use. Overall we expect it to be in very good condition, but if you are not entirely satisfied please get in touch with us.