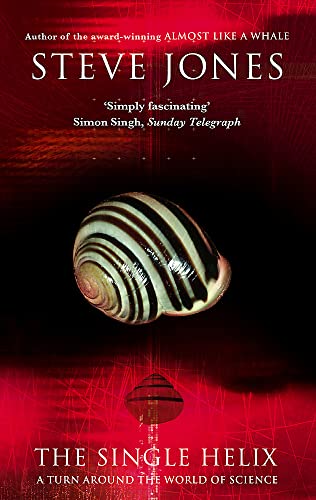 In Stock
$16.49
inc. GST
From the author of the widely acclaimed Y: THE DESCENT OF MEN
Very Good Good
Only 3 left

The Single Helix: A Turn Around the World of Science by Professor Steve Jones

THE SINGLE HELIX is a miscellany of a hundred easy pieces about science. It brings to life a vast diversity of subjects, united under the banner of scientific truth - the universal solvent that brings clarity to almost all the mysteries of the world we live in.

Scientists are trained to know ever more about even less but here Steve Jones sets out deliberately to explore subjects in which he is emphatically not an expert (although his favourite snail, the single Helix of his title, does poke in a tentacle here and there). His insatiable curiosity and enthusiasm as he sheds light on unexpected corners of knowledge combine to produce science writing at its very best.

From chaos in the heavens to the fight against creationism, from optical illusions in tartan to the mathematics of elections and what rules the sex lives of cats THE SINGLE HELIX is a scientist's look at sciences other than his own - and as a result its author has been forced to make the complicated simple enough for even a biologist to understand.

Delightful compilation of 100 easy pieces . . . one of the world's best writer-scientists . . . Jones is the Alan Bennett of science * FINANCIAL TIMES *
Jones once again shows that, for all its difficulties, science can still be fun * INDEPENDENT *
One of the most engaging and revealing portraits of science and its practitioners you'll ever read * DAILY Express *
Wonderful examples of scientific storytelling . . . Simply fascinating * Simon Singh, Sunday TELEGRAPH *

Professor of Genetics at University College London, Steve Jones gave the Reith Lectures in 1991 and presented a TV series on human genetics and evolution. A columnist for the DAILY TELEGRAPH, he frequently appears on radio and TV.

GOR001596775
The Single Helix: A Turn Around the World of Science by Professor Steve Jones
Professor Steve Jones
Used - Very Good
Paperback
Little, Brown Book Group
2006-11-02
336
0349119406
9780349119403
N/A
Book picture is for illustrative purposes only, actual binding, cover or edition may vary.
This is a used book - there is no escaping the fact it has been read by someone else and it will show signs of wear and previous use. Overall we expect it to be in very good condition, but if you are not entirely satisfied please get in touch with us.