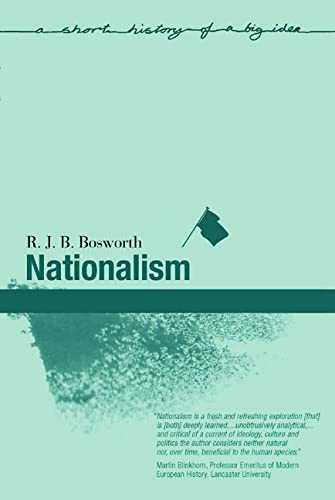 Nationalism
by R. J. B. Bosworth

Out of Stock
$18.49
inc. GST
Contains introductions to the ideologies that shaped the twentieth century. This book provides a study of nationalism that explores the origins and purpose of the division of human kind into national groupings. Exploring the history of nationalism, it suggests that nations work best when they possess the ability to criticise their nationalism.
Very Good
Only 0 left

Nationalism by R. J. B. Bosworth

Why do many of us swell with pride at the sound of the national anthem or sight of the national flag? Why do we use our nationalities to describe who we are? Why do politicians claim to stand for 'national values' above all else?

In his new critical study of nationalism, R.J.B. Bosworth explores the origins and purpose of the division of human kind into national groupings. The book explores the history of nationalism, arguing that the present is seeing a dangerous growth of what might be called 'national fundamentalism'. Bosworth suggests that nations work best when they possess the ability to criticize their nationalism. They become menacing when they demand the nationalization of people's empathy, lauding 'national values', for example, rather than humane or civilized ones. Nationalism demonstrates how the globalizing world is seeing a renaissance and adaptation of ideas that were prevalent in the inter-war period, and challenges us to decide whether we should reject nationalist fundamentalism in a civilized world.

"A stunning account of how Europe... came to embrace nationalist attachments to land and flags and anthems and ancestry... Bosworth's grim tale of avaricious patriotism and chauvinist fealty gone feral is told with ironic grace and deftness."

"Nationalism is a fresh and refreshing exploration of this seemingly inextinguishable phenomenon that deserves to be widely read and its message taken very seriously. [I]t is [both] deeply learned and unobtrusively analytical, [as well as] openly personal, spikily argumentative and; yes, critical of a current of ideology, culture and politics the author considers neither natural nor, over time, beneficial to the human species."

"This is an intellectually stimulating and playful volume which many readers will find satisfying."

R.J.B. Bosworth is Professor at the Department of History, University of Western Australia.

GOR003289892
Nationalism by R. J. B. Bosworth
R. J. B. Bosworth
Short Histories of Big Ideas
Used - Very Good
Paperback
Taylor & Francis Ltd
2007-04-19
240
0582506026
9780582506022
N/A
Book picture is for illustrative purposes only, actual binding, cover or edition may vary.
This is a used book - there is no escaping the fact it has been read by someone else and it will show signs of wear and previous use. Overall we expect it to be in very good condition, but if you are not entirely satisfied please get in touch with us.