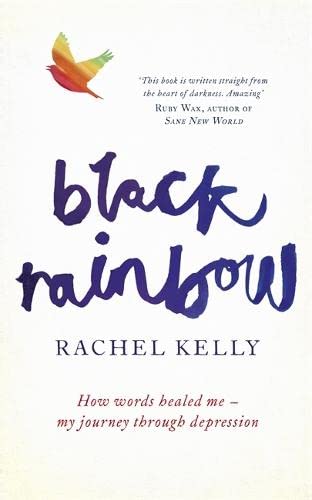 Black Rainbow: How words healed me: my journey through depression by Rachel Kelly

Black Rainbow is the powerful first-person story of one woman's struggle with depression and how she managed to recover from it through the power of poetry.

In 1997, Oxford graduate, working mother and Times journalist Rachel Kelly went from feeling mildly anxious to being completely unable to function within the space of just three days. Prescribed antidepressants by her doctor, and supported by her husband and her family, Rachel slowly began to get better, but her anxiety levels remained high, and six years later, as a stay-at-home mother, she suffered a second collapse even worse than the first.

Throughout both of Rachel's periods of severe depression, the healing power of poetry became an integral part of her recovery. As someone who had always loved poetry, it became something for Rachel to cling on to in times of need - from repeating short mantras to learning and reciting entire poems - these words and verses became a powerful force for change in her life. In Black Rainbow Rachel analyses why poetry can be one answer to depression, and the book contains a selected 40 of the poems that provided Rachel with solace and comfort during her breakdown and recovery.

At a time when mental health problems and depression are becoming more common, and the stigma around such issues is finally being lifted, this book offers a lifeline for anyone seeking to understand depression and seek new ways to treat it. Poetry is free, has no side-effects and, as Rachel can attest, 'prescribing words instead of pills' can be an incredibly powerful remedy.

This book is written straight from the heart of darkness. Amazing * Ruby Wax, author of Sane New World *
Rachel Kelly has written with bracing honesty and considerable courage about her own struggles with depression. She tells of both her own travails and the solutions to them, and her book will be immensely helpful to others in like circumstances * Andrew Solomon, author of Far From the Tree and The Noonday Demon *
A poignant and powerful description of one woman's journey through the abyss of depression, how she found solace in poetry and the inner strength to recover. This book offers hope and inspiration to anyone whose lives have been touched by mental illness * Marjorie Wallace CBE, Founder, SANE *
A revelatory read and alchemical tale of persona transformation: Kelly turns the lead of depression into the gold of emotional health. Art, in this case poetry, is movingly shown to be a royal route away from depression * Oliver James, psychologist and author of They F*** You Up *
I am utterly riveted by this book. It is completely compelling. * Isla Blair *
Outstanding ... I have never read anything so suitable for us to recommend to patients * Dr Martin Scurr *
harrowing but hopeful memoir of resistance and recovery * The Times *
Anyone touched by depression will take courage from Kelly's account; anyone else will gain a new and profoundly sympathetic understanding of the severity and arbitrariness of the disease. * The Times Magazine *
This is a moving addition to the body of depression literature, written with compassion and insight * The Observer *
a compelling and brutally honest account * Telegraph *
Kelly writes with honesty, lucidity and directness * Spectator *
The memoir has the gripping immediacy of a novel and taught me much about depression that perhaps I should have known, but didn't. Its advice on diet, exercise, supplements and getting help will be invaluable for anyone who finds themselves barked at by the black dog. -- Bel Mooney * Daily Mail *
It's a book we should all read, especially women, and especially those of us who have, like me, had their own struggles with what Winston Churchill (another sufferer) called the Black Dog ... Women, especially those with new babies, exhausted from pregnancy, sleepless nights and the sheer shock of motherhood, are often consumed with fear bordering on terror. That's what depression is, and if it applies to you or your daughter, take heart. Help is available. And it will help to read Rachel Kelly's Black Rainbow -- Judy Finnigan * Daily Express *

Rachel Kelly was a journalist for many years, and spent ten years on the Times, where she was variously a reporter, feature writer and columnist, writing the paper's 'Alternatively Speaking' health column. Her interest in health and therapy led to her completing the first year of training as a counsellor. Her long-standing passion for poetry led to her becoming the co-founder of the iF poetry app (2011) and co-editor of iF: A Treasury of Poetry for Almost Every Possibility (Canongate, 2012).

Rachel lives in London with her husband, Sebastian, and their five children.

GOR005811143
Black Rainbow: How words healed me: my journey through depression by Rachel Kelly
Rachel Kelly
Used - Very Good
Hardback
Hodder & Stoughton General Division
2014-04-24
304
1444789996
9781444789997
N/A
Book picture is for illustrative purposes only, actual binding, cover or edition may vary.
This is a used book - there is no escaping the fact it has been read by someone else and it will show signs of wear and previous use. Overall we expect it to be in very good condition, but if you are not entirely satisfied please get in touch with us.