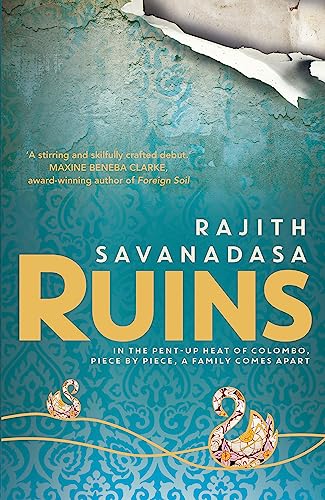 In the pent-up heat of Colombo, piece by piece a family comes apart . . .

A stunning debut novel from a fresh new voice in Australian fiction, for fans of Zadie Smith and Rohinton Mistry.

'RUINS is a stirring and skilfully crafted debut, and Savanadasa's characters are so vividly drawn they feel like family. With his sharp and masterful observations of race, class and gender in the "new" Sri Lanka, Savanadasa takes his seat beside Omar Musa, Alice Pung and Michael Mohammed Ahmad to usher in the brave and stunning new dawn of diverse Australian fiction.' Maxine Beneba Clarke, award-winning author of FOREIGN SOIL

A country picking up the pieces, a family among the ruins.

In the restless streets, crowded waiting rooms and glittering nightclubs of Colombo, five family members find their bonds stretched to breaking point in the aftermath of the Sri Lankan civil war.

Latha wants a home. Anoushka wants an iPod.
Mano hopes to win his wife back.
Lakshmi dreams of rescuing a lost boy.
And Niranjan needs big money so he can leave them all behind.

'A highly accomplished and well-oiled book . . . It claims the attention of the reader with rare confidence and doesn't let it go . . . This book could well achieve the same kind of success as The Kite Runner.' SYDNEY MORNING HERALD

'RUINS is an impressive debut. Savanadasa joins other important contemporary Australian-Sri Lankan novelists . . . in enriching the globalised phenomenon that is Australian literature.' THE SATURDAY PAPER

'RUINS stands out from other Australian debuts for its ambitious structure, its vibrant setting, and the depth and complexity of the Sri Lankan family at the centre of the story.' READINGS

'A rich and colourful story of family and country, its complexity revealed in layers . . . Only through the eyes of others can we begin to see a place.' Inga Simpson, author of the critically acclaimed WHERE THE TREES WERE

Savanadasa has written a riveting debut that examines the intricacies of class, racial and generational divides in contemporary Sri Lanka. -- Gerard Elson * Australian Bookseller & Publisher *
sometimes an author turns up who has such a feel for the nuances of personality that their characters seem eerily familiar, as if you might once have known them, or might bump into them in the street. Rajith Savanadasa is one of those writers * Adelaide Advertiser *

If you want to be faced with the truth that all families are equally tragic, no matter where they are, or appreciate multilinguality in your novels, then read this book.
- Kimberly McIvor

* Salient *
an outstanding debut novel * West Australian *
Savanadasa's ear for dialogue is second to none and he mixes Tamil and Sinhala words into the narrative fearlessly. Nothing is obvious in this memorable tale. It rolls along effortlessly, pulling together centuries of history, tradition and the residual traumas of war, poverty and loneliness. It is only as the story races towards a surprising denouement that its full power becomes apparent. * Post Magazine *
Savanadasa keeps the tension alive till the very end, letting his characters redeem and redefine themselves by their actions rather than their words. -- Faizal Kahn * Financial Express New Delhi *
The characterisation is vivid, and the narrative drive is sustained as the plot layers build up. - Lisa Hill. * ANZ LitLovers Litblog *
Tells of life in the so-called New Sri Lanka, after the end of the civil war early this century. * Janet Croft book reviews blog *
So fresh and descriptive of our diverse society. Beautifully crafted. * Manly Daily *
an absolute must-read * Woman's Day *
Ruins heralds the arrival of a gifted new talent in Australian fiction. * Australian Bookseller + Publisher *
Ruins stands out from other Australian debuts for its ambitious structure, its vibrant setting, and the depth and complexity of the Sri Lankan family at the centre of the story. * Readings *
Ruins is an impressive debut. Savanadasa joins other important contemporary Australian-Sri Lankan novelists . . . in enriching the globalised phenomenon that is Australian literature. * The Saturday Paper *
For a debut writer there is a great deal of assurance in his ability to create nuanced characters and layers of meaning. * Brona's Books *
Ruins is a character-driven exploration of Sri Lanka as a society . . . an intelligent, engaging novel. * Dark Matter Zine *
a tale of a middle-class family in Colombo at the time the war was coming to an end. * Sydney Morning Herald *
Ruins is an impressive debut. Savanadasa joins other important contemporary Australian- Sri Lankan novelists - Yasmine Gooneratne, Michelle de Kretser and Chandani Lokuge - in enriching the globalised phenomenon that is Australian literature * The Saturday Paper *
s a highly accomplished and well-oiled book -- Michael Mcgirr * Sydney Morning Herald *
Rajith Savanadasa's Ruins is a remarkable first novel. It is a highly accomplished andwell-oiled book. The pieces fit together as neatly as cogs. Its characters arewarm, engaging and vulnerable. It claims the attention of the reader with rare confidence and doesn't let it go. * Sydney Morning Herald, The Saturday Age, Canberra Times *

* Sunday Age *
I really enjoyed Ruins. Highly recommended. * ANZ LitLovers Litblog *
A stirring and skillfully crafted debut. * Country News insert, Shepparton *
a refreshingly diverse voice in Australian literature -- Ashleigh Meikle * The Book Muse *
As only the best fiction can, Ruins has taken me into the life not just of the central characters but also of their culture -- Bev Roberts * PEN Melbourne Quarterly 2 and 3 2016 *
The whole reason why I picked up ruins was to discover and explore a different way of life! -- Stacey Kym * Twin Reads *

Rajith Savanadasa was born in Sri Lanka and now lives in Melbourne. He turned to creative writing in the final year of an engineering degree, which he followed up with the Professional Writing and Editing course at RMIT University. He was shortlisted for the Asia-Europe Foundation short story prize in 2013, the Fish Publishing short story prize in 2013, received a Wheeler Centre Hotdesk Fellowship in 2014 and was part of the QWC/Hachette Manuscript Development Program in 2014. RUINS is his debut novel. Rajith is also the founder and primary contributor to Open City Stories, a website documenting the lives of a group of asylum seekers in Melbourne.

GOR009717859
Ruins by Rajith Savanadasa
Rajith Savanadasa
Used - Very Good
Paperback
Hachette Australia
2016-06-28
352
0733635059
9780733635052
N/A
Book picture is for illustrative purposes only, actual binding, cover or edition may vary.
This is a used book - there is no escaping the fact it has been read by someone else and it will show signs of wear and previous use. Overall we expect it to be in very good condition, but if you are not entirely satisfied please get in touch with us.