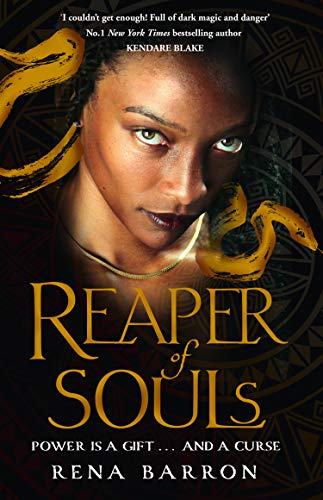 Reaper of Souls by Rena Barron

Before, Arrah was shamed by having no magic at all. Now, with demons on warpath, she is the only one in the world who has it.

Explosive fantasy set in a West-African world of magic and legend. Perfect for fans of Tomi Adeyemi and Sarah J Maas.

Before, Arrah was shamed by having no magic at all. Now, with demons on warpath, she is the only one in the world who has it.

Explosive fantasy set in a West-African world of magic and legend. Perfect for fans of Tomi Adeyemi and Sarah J Maas.

I AM POWER.
I AM MY ANCESTORS.
I DO NOT WALK ALONE.

After so many years yearning for the gift of magic, Arrah has the one thing she's always wanted - but it came at too steep a price. Now the last surviving witchdoctor, she's been left to pick up the shattered pieces of a family that betrayed her, a kingdom plunged into chaos, and a love that can never be.
While Arrah returns to the tribal lands to search for survivors of the demons' attack, her beloved Rudjek hunts down the remnants of the demon army - and uncovers a plot that would destroy what's left of their world.
The Demon King wants Arrah, and if she and Rudjek can't unravel his schemes, he will destroy everything, and everyone, standing in his way.

In this roaring sequel to KINGDOM OF SOULS, Rena Barron weaves a tale of mythology, love, whip-fast action and trademark twists that asks the question: can you ever leave your past, ancestors, behind?

"I couldn't get enough of Kingdom of Souls. Wonderfully written, and full of dark magic and danger, it was a story I couldn't wait to escape into. Highly recommended!"
Kendare Blake, #1 New York Times bestselling author of the Three Dark Crowns series

"Magnetic and addictive, Kingdom of Souls turns ambition into sacrifice and blood into power. Magic is always worth the price-and the pain-and this book is black girl magic at its finest."
Dhonielle Clayton, New York Times bestselling author of The Belles

"A tough-as-nails protagonist overcomes odds stacked heavily against her in this captivating debut." (Booklist)

Rena Barron grew up in small-town Alabama, where stories of magic and adventure sparked her imagination. After penning her first awful poem in middle school, she graduated to writing short stories and novels by high school. Rena has an affinity for good cheese, wine, and nature. When she's not writing, she can be found reading or brushing up on her French.

Find her online at www.renabarron.com

NGR9780008302283
9780008302283
0008302286
Reaper of Souls (Kingdom of Souls trilogy, Book 2) by Rena Barron
Rena Barron
Kingdom of Souls trilogy
New
Hardback
HarperCollins Publishers
2021-02-18
448
N/A
Book picture is for illustrative purposes only, actual binding, cover or edition may vary.
This is a new book - be the first to read this copy. With untouched pages and a perfect binding, your brand new copy is ready to be opened for the first time
Trustpilot