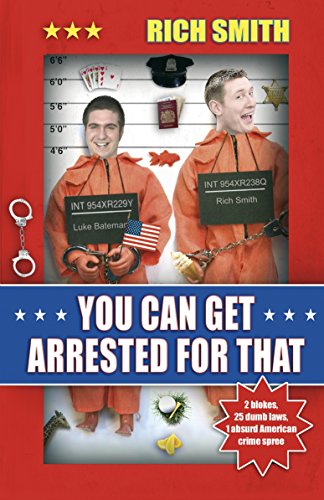 You Can Get Arrested For That
by Rich Smith

In Stock
$13.69
inc. GST
What started out as an innocent board game inspired Rich Smith to undertake a daring crime spree across the United States - a journey to break the dumbest American laws on the statute books.
Very Good Good
Only 1 left

You Can Get Arrested For That Summary

You Can Get Arrested For That by Rich Smith

What started out as an innocent board game inspired Rich Smith to undertake a daring crime spree across the United States - a journey to break the dumbest American laws on the statute books. In the Land of the Free, it is illegal to: - Lie down and fall asleep in a cheese factory (South Dakota) - Play a trumpet with the intention of luring someone to a store (California) - Catch a fish with a lasso (Tennessee) Rich's first problem was narrowing down the huge choice of laws to just twenty-five. The second was persuading his mate Bateman to come along, to do some of the driving - and possibly provide bail money. The third was finding someone who was willing to help him break his first law: one of San Francisco's oldest statutes, which related to oral sex. No, Bateman couldn't help with that one. Join Rich as he attempts his one-man crime wave - almost as difficult as a one-man Mexican wave.

You Can Get Arrested For That Reviews

"Brilliant and funny...An outrageous romp of a book that feels like it's been waiting for someone to write it forever" * Sunday Sport *
"Smith and a friend go on a mission to break 25 of America's dumbest laws, such as falling alseep in a cheese factory and catching fish with a lasso. Hilarious" * Nuts magazine *
"Opinion is divided in the office on this one... half of us (the girl half) has fallen in love with this student joker and think traversing America while breaking its ridiculous laws is a funny idea...The other half is full of bravado about how they did this sort of thing all the time while at university, too. Either way, it's good for a titter on a long-haul flight" * Sunday Times *

Rich Smith lives in Portreath on the north Cornish coast. He is currently studying for a degree in journalism. His ambition is to become a primary school teacher and continue travelling, as long as US law inforcement doesn't catch up with him. For more information on Rich Smith, see his website at www.rich-smith.net

GOR000996575
You Can Get Arrested For That by Rich Smith
Rich Smith
Used - Very Good
Paperback
Transworld Publishers Ltd
2007-08-01
320
0552154067
9780552154062
N/A
Book picture is for illustrative purposes only, actual binding, cover or edition may vary.
This is a used book - there is no escaping the fact it has been read by someone else and it will show signs of wear and previous use. Overall we expect it to be in very good condition, but if you are not entirely satisfied please get in touch with us.