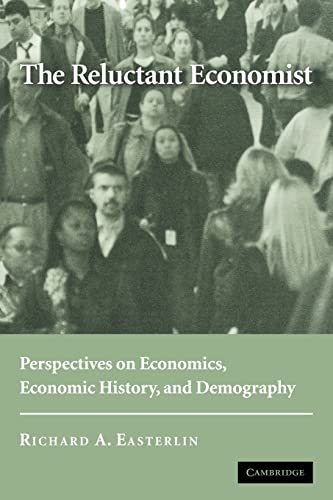 The Reluctant Economist
by Richard A. Easterlin (University of Southern California)

The Reluctant Economist: Perspectives on Economics, Economic History, and Demography by Richard A. Easterlin (University of Southern California)

Where is rapid economic growth taking us? Why has its spread throughout the world been so limited? What are the causes of the great twentieth century advance in life expectancy? Of the revolution in childbearing that is bringing fertility worldwide to near replacement levels? Have free markets been the source of human improvement? Economics provides a start on these questions, but only a start, argues economist Richard A. Easterlin. To answer them calls for merging economics with concepts and data from other social sciences, and with quantitative and qualitative history. Easterlin demonstrates this approach in seeking answers to these and other questions about world or American experience in the last two centuries, drawing on economics, demography, sociology, history, and psychology. The opening chapter gives an autobiographical account of the evolution of this approach, and why Easterlin is a 'reluctant economist'.

'Reluctant? Richard Easterlin brings to his work such a striking combination of curiosity, enthusiasm, ambition, precision, and skepticism that we might better call him the Thoughtful Economist. Here we witness him applying his unique synthesis of demography, social psychology, and economic analysis to a vast but well disciplined array of evidence concerning multiple times, places, and social phenomena.' Charles Tilly, Columbia University
'In this important and thought-provoking set of essays, Richard A. Easterlin draws upon history, demography, and related social sciences to supplement economic analysis and to provide a rich explanation of major questions concerning the Industrial, Demographic, and Mortality Revolutions and the links among them. The range of ideas and information presented make this a most significant contribution to understanding economic and demographic developments in the past, present, and future.' Stanley Engerman, University of Rochester
'This is a must read book for students of economic and demographic history. Richard Easterlin is one of the founders of the field and continues to be one of its most original thinkers. As he does in this book, he has always challenged accepted ways of thinking by both economists and historians.' Elizabeth Hoffman, President, University of Colorado
'Dick Easterlin has been reluctant to conform to economists' disciplinary prejudice against learning from 'subjective' data on people's motives and intentions or from the knowledge patiently built up in disciplines like history and demography. The resulting breadth of curiosity and knowledge has helped him produce an extraordinary body of work. Whether assessing the impact of economic growth on human well-being, the influence of aspiration levels on family size, or the role of preferences in explaining occupational choice, Easterlin's analyses are, over and over again, refreshingly non-dogmatic, richly informed and insightful. Other economists should be so reluctant.' Michael McPherson, Spencer Foundation
'In this collection of well-written essays, one of the deepest and most wide-ranging scholars working in historical social science today raises a number of the most important and relevant issues of our time. Easterlin asks all the right questions: why is the Western World so rich and other are not? How did we get this way? What is the relationship between longer lives and higher incomes? His answers are as informed as they are thought-provoking.' Joel Mokyr, Northwestern University
'This volume confirms that Easterlin has one of the most probing, original minds in the social sciences today. He ranges widely over economics, demography, psychology, and political science to help the reader understand the nature and causes of the great social transformations of the past several centuries.' Samuel Preston, University of Pennsylvania
'It is a magnificent book - a fitting tribute to the career of one of the most imaginative and important economists of his generation. Nobody does a better job showing how the insights provided by economics can be enhanced by reaching out to other social sciences. This book has much to interest not only economists but also sociologists, psychologists, demographers, historians and others. There is certainly nothing 'dismal' in Dick Easterlin's version of economic science!' Morton Owen Schapiro, President, Williams College
'Easterlin (University of Southern California) explains that he's a 'reluctant' economist because he's learned from experience that economists often look upon other social sciences with contempt, an attitude that's prevented economists from adopting more useful theories and proposing more relevant policies. Instead he embraces the tradition of his mentor, the polymath Simon Kuznets, to bring economics, psychology, demography and history together. This collection of essays, all but two originally published between 1975 and 2000, includes many gems that are perfect for classroom use because of Easterlin's ability to pose important questions and address them using clear, insightful, yet simple theories in conjunction with easy-to-interpret quantitative measures. Highlights include the classic Why Isn't the Whole World Developed? (which focuses on knowledge and schooling); Easterlin's well-known theories about the causes and consequences of the baby boom; thoughts on the relationship between the industrial and mortality revolutions; and an argument that economic growth's merits have been vastly oversold. Critics will complain that the essays' coherence comes from oversimplification, that they refuse to ferret out marginal effects using standard econometric techniques, and that they overstate economists' unwillingness to listen to what people say.' Choice
'This is a very enjoyable and stimulating collection of essays.' Population studies

About Richard A. Easterlin (University of Southern California)

Richard A. Easterlin is University Professor and Professor of Economics, Department of Economics, University of Southern California. He is a member of the National Academy of Sciences, past president of the Population Association, a Fellow of the American Academy of Arts and Sciences, and a former Guggenheim Fellow. He is editor of Happiness in Economics (2002) and author or co-author of Growth Triumphant: The 21st Century in Historical Perspective (1996), The Fertility Revolution (1985), Birth and Fortune: The Impact of Numbers on Personal Welfare (1980; 2nd edition 1987), and Population, Labor Force, and Long Swings in Economic Growth: The American Experience (1968).

List of tables and figures; Preface; Acknowledgements; Part I. Economics: 1. The reluctant economist; 2. Economics and the use of subjective testimony; 3. Is economic growth creating a new postmaterialistic society?; Part II. Economic History: 4. Why isn't the whole world developed?; 5. Kuznets cycles and modern economic growth; 6. Industrial revolution and mortality revolution: two of a kind?; 7. How beneficent is the market? A look at the modern history of mortality; Part III. Demography: 8. An economic framework for fertility analysis; 9. New perspectives on the demographic transition; 10. Does human fertility adjust to the environment? Population change and farm settlement in the northern United States; 11. America's baby boom and bust, 1940-80: causes and consequences; 12. Preferences and prices in choice of career: the switch to business; Epilogue; Bibliography; Index.

GOR006753744
The Reluctant Economist: Perspectives on Economics, Economic History, and Demography by Richard A. Easterlin (University of Southern California)
Richard A. Easterlin (University of Southern California)
Used - Very Good
Paperback
Cambridge University Press
2006-02-13
308
0521685117
9780521685115
N/A
Book picture is for illustrative purposes only, actual binding, cover or edition may vary.
This is a used book - there is no escaping the fact it has been read by someone else and it will show signs of wear and previous use. Overall we expect it to be in very good condition, but if you are not entirely satisfied please get in touch with us.